(An edited version this review originally went up here. I’ve cross posted the original version onto my own blog for posterity.)

Welcome to the exotic Isla Dorada! As part of an expedition to explore the island, you will travel on yaks, gorillas, camels, giant flying birds, kayaks and an airship to the island’s various villages to uncover priceless treasures. Well, not exactly priceless, as the person who recovered the most valuable treasures is the winner.

In Isla Dorada, the board represents the island where the expedition’s plane has crash landed. Various locations are marked on the board with numerous paths between the locations. Each path is colour coded and can only be travelled on using the appropriate vehicle/animal. There is a single playing piece which represents the entire expedition which moves to a different location every round and each player will try to influence the expedition to travel to particular locations. At the beginning of the game, each player receives 10 gold coins, 2 treasure cards, a destiny card and a curse card. The gold coins are worth a point each at the end of the game. Treasure cards are worth different amount of points, indicating the value of the treasure while curse cards are worth negative points. Each destiny card has different objectives that can be achieved by the player for points. The treasure cards indicate the locations where the player can find the treasure, and only that player has access to that particular treasure.

When the expedition arrives at a particular location, each player who has a treasure card that matches the location can play it but if a player has a matching curse card he or she must play it. Destiny cards are more varied and can range from requiring the player to visit certain locations, collect particular travel cards or avoid a certain mode of transport. Based on the cards they receive at the beginning of the game, each player will have differing objectives and locations which they want the expedition to visit or avoid.

How then do the players decide where the expedition moves each round? The destination of the expedition is chosen by the expedition leader who is determined through a bidding process. Each player starts with a hand of travel cards, which represent the various modes of transport available. Starting from the previous expedition leader, each player can bid travel points (usually 1 travel card equals 1 travel point, but there are some that are worth more) to travel to a particular destination and player with the highest bid is elected the new expedition leader and the expedition moves to his or her chosen destination. The bidding process is complicated by the requirements of the travel cards to match the route to the destination. Each route to a different location is coloured and only certain modes of transport can be used to travel on those routes. Kamel cards can only be used to bid on sand routes, Yak cards for mountain routes, Gonogo cards for forest routes, and Kayak cards for water routes. There are also two special cards (Drako and Airship) which represent air travel and can be used to augment a bid on any route or can be used by themselves to travel to any location on the board. However, using air travel requires the payment of gold coins.

Once the expedition travels to a new location, a travel marker is placed on the location and players now play treasure cards and curse cards. During certain rounds denoted by orange travel markers, players receive new treasure cards. Then, starting with the expedition leader each player takes turns gaining new adventure cards from either the 4 face up cards or from the adventure card deck. The adventure cards contain a mix of travel cards, bonus cards and action cards. Travel cards are used for bidding while bonus cards augment the value of treasure cards that you play. The action cards have various effects such as transforming your travel cards, stopping a player from bidding or even summoning the mighty Leviathan or Bigfoot to block travel routes. Each player also has the chance to spend an additional gold coin to draw another card. Once all players are done drawing adventure cards, the round is over and the current expedition leader starts the bidding for the next round. There are only 16 travel markers and as such the game only lasts 16 rounds. At the end of the 16 rounds, the players total up points from treasures, gold coins and destiny cards less the negative points from any curses and the player with the highest total is declared the winner. 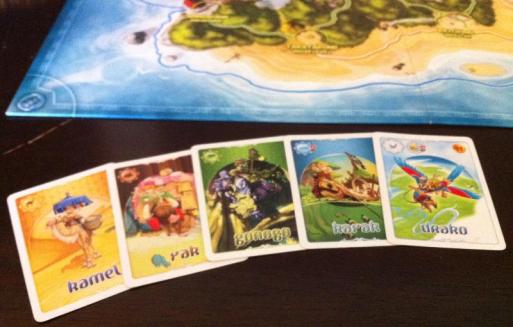 The gameplay of Isla Dorada is relatively simple and to be honest, there is not a high level of strategy in this game. It is also very easy to teach and is a great game to play with non-gamers. However, Isla Dorada is not meant to be a brain burning strategy game but is more about the experience of discovering treasure and screwing over your cursed friends along the way. This is a game where I just enjoy the game regardless of whether I win or lose.

The auction mechanic is flavorful and usually goes pretty quickly as sometimes the expedition leader could pick a location that no one objects to. There are some tactical decisions to be made, but the hidden treasures, destinies and curses makes it difficult to predict player bids reliably and there are also some pretty swingy action cards. As such, the game can sometimes swing wildly and become unpredictable. In any other game, this might turn me off it but since I really enjoy the theme and flavour and I still find the game engaging when I’m not “winning” and I can just sit back and enjoy the ride (and try to mess with other players’ bids).

The theme and art are light hearted and lend to that sense of fun and adventure. I absolutely love the art and visual design of the game, which I think is its strongest point. The art is cute and evocative, with bright colours and distinctive designs. I especially love the quirky names of the locations and the cards, and I enjoy just calling out the names of the locations and cards as we play. The game also comes with three plastic miniatures for the expedition, the Leviathan and the Bigfoot which are just gorgeous to behold.

Overall, Isla Dorada is a fun romp of a game with simple mechanics and beautiful art and I give it 4 out of 5 Kamels and an additional bonus Gonogo for the fabulous visual design. I enjoy the theme and the player interactions in the game and would recommend it as a light-hearted introduction to non-traditional board games.