Petition the gods for aid in establishing your supremacy over the islands of the Cyclades in this strategy board game designed by Bruno Cathala and Hank Longadong (It’s actually Ludovic Maublanc. I forgot his name while writing the draft, but I liked my placeholder name so I left it in. And yes, that is what he said.). 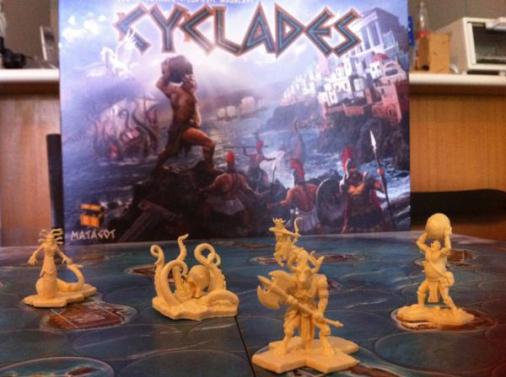 In Cyclades, each player takes control of a civilization in ancient Greece vying for control of the Cyclades chain of islands. Although there are elements of classic area control gameplay, the aim of the game is not pure military conquest but to establish your civilization as the dominant influence in the islands by establishing two metropolises. The first player to establish two metropolises on the islands is declared the winner. There are 3 ways to establish a metropolis in the game. The first is to build one each of a fortress, a port, a temple and a university. The second is to control 4 Philosophers, and the last is through military conquest and taking over another player’s metropolis. A metropolis also has all the powers of the other buildings. You can obtain your metropolis in any way you like, as long as you are the first to control two.

Now that you are set up, how do you go about getting those buildings, philosophers and mighty armies? At the heart of Cyclades is the offering/auction system. At the beginning of every round, players gain gold equal to the prosperity markers they control on their islands or sea trade spaces. Then, each player take turns giving offerings (bidding) to various gods to gain their favour and use their powers. There are 5 possible gods to bid on which are: Zeus, Athena, Ares, Poseidon and Apollo.

The auction uses a fixed bid system in which your bid amount can not be changed once it is declared. The moment you are outbid on any god, you have to move immediately move your bid to another god without changing the bid amount. Furthermore, the order of the gods is shuffled each turn and determines the turn order for the round and the bid order in the next round. The only exception is Apollo, as you can always move your bid to Apollo for free and Apollo is always last in the order. Thus, your bid not only needs to take into account the powers made available by your chosen god but also your position in the turn order.

Once all players have successfully bid and paid for their bids with gold, the players take turns to activate the powers provided by their chosen god or activate mythical creature cards. Each god provides different powers which require additional offerings of gold to activate:

Various mythical creatures provide additional powers such as protecting an island from attack, stealing gold from another player or even unleashing the mighty Kraken! (You’re obligated to say the words) Once each player has had a turn, the round is over. The gods are reshuffled and the next round begins. The game has no set number of rounds but goes on until one player controls two metropolises. 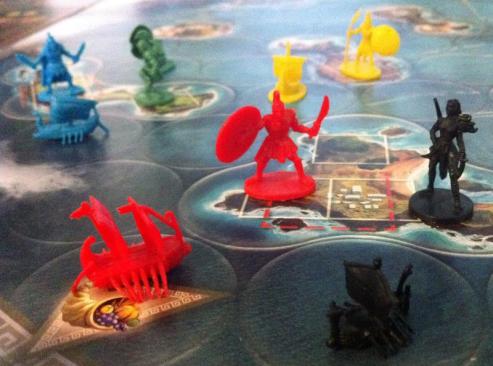 The interplay of mechanics in Cyclades is really interesting to me. The auction mechanic used in this game really rewards advance planning as you have to really consider how each piece of gold can be used when determining your bid. Depending on the board position, you may also try to manipulate your turn order or block another player during the bid. There are quite a few things to consider before you decide on your bid as most information is known as soon as the order of the gods is revealed. The only hidden information is the amount of gold held by each player. This presents a dilemma as to really optimise your bid, you would want to know the amount of gold held by every player and you could keep a running total of every player’s gold yourself. However, if everyone does this, it can lead to analysis paralysis as you try to consider each player’s possible bids and moves. Thus, I can understand why the designers decided to have the gold amount hidden as the players who want to keep track of it can do it anyway and for those who prefer a bit of calculated risk they can block out some information.

I really like how the game seamlessly integrates the theme into the gameplay. The unique powers made available by each god are related to the god’s domains and the idea of competing offerings for the favour of the gods works quite well for the auction. The game also seems to strike a good balance between the multiple paths to victory and styles of play. I have had games where military conquest played a huge part and others where not a single attack was made on another player. To be honest, I feel I have not played enough of the game to really grasp all its intricacies and pass judgment on the strategy aspect of the game. However, every time I play I find myself appreciating the interlocking parts of the design and I really enjoy how the auctions play out.

Another reason I like Cyclades is the art and visual design of the game. I feel the art team really hit it out of the park with this design. The art used on the cards and boards is very polished and takes many cues from classical Greek art and designs. I like the circular design of the board which really sets it apart in my eyes, even though I know you could basically replace it with hexes. The game also comes with heaps of miniatures, and what I really like are the unique designs for the armies and ships of each civilization. The sculpts used for the monster miniatures are also gorgeous.

One minor issue I had was with the heavy use of symbols on the mythical creature cards (What I have come to call Race for the Galaxy Syndrome). I understand the reasoning behind using symbols in place of text on the cards for language dependency issues and I appreciate that the Greek style is maintained even on the symbols. There is a summary of the game printed on the player screens but that also used symbols. However, some of the cards really need a fair bit of explanation and there is only one summary booklet provided. A summary sheet for each player would have been greatly appreciated.

Finally, the main reason I like Cyclades is also the reason why it does not get as much play. Whenever a priest is recruited, I cannot resist the temptation to go WOLOLO AIAOH WOLOLO WOLOLO AIAOH WOLOLO which my friends do not always appreciate. I need to have the priest convert me some more friends…. Overall, Cyclades is an interesting strategic game with a great auction system and amazing art and design. I give it 4 out of 5 WOLOLOs.