Back in the saddle! Apologies for neglecting my tiny corner of the web. I had a very good holiday in April, while Jeannie was here visiting, and I managed to play a lot of games in the intervening time too. I could also blame League of Legends and/or Diablo 3 for my extended absence or my busy work schedule. However, the truth is much more exciting! I was actually approached by a pair of time traveling humans who needed my help stabilizing the temporal breach that allowed them to plant the dinosaur fossils in our past when in fact they were creatures from our future! Mind blown.

In any case, here are some games that I and my cohorts have been playing this whole time, and some comments: 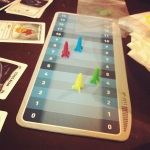 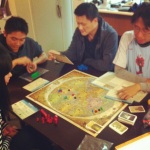 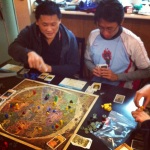 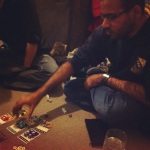 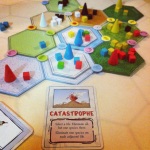 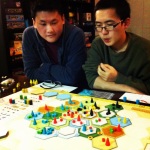 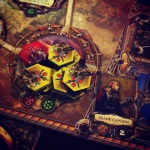 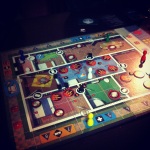 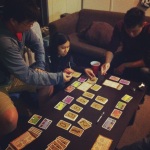 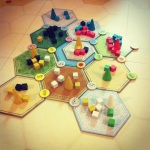 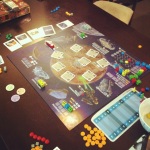 We’ve played a couple of game of Alien Frontiers and it has been a blast. I am continuing to enjoy the game so far, but I feel that the area control portion of the game is the weakest pert of it. I really love how the dice are used in the game and I feel like I would enjoy it a whole lot more if the end result was something other than a simple area control game. I’m thinking of trying the long game with more than the 6 colonies for 4 players to see if that makes the area control bit more interesting, as there are more opportunities to mess with other players.

Citadels is a classic that we’ve revisited. I need to remember that I have this now and bring it out more often as it is a blast to play, and even more when you get the right people. Screwing Daniel out of the King spot and trying to get a read on what the player with the most money will pick so you can steal his gold is always amazingly fun. The fact that it can cater to larger groups really well is also a big plus.

We’ve played Dominant Species a few more times now and I have grown to really like this gem of a game. It’s mean and it puts player conflict on the board immediately with so many ways to screw around with your opponents. Mess with the food, muscle in on high scoring territories, glaciate on prosperous areas, or just plain outright kill your opponent’s animals. There is a whole lot of interaction in this game and you are constantly stepping on each other’s toes as you try to survive. It’s also a real brain burner since there are a lot of factors to take into account (i.e. how can I screw Jon out of these territories by getting rid of his food while gaining dominance over Prateek by placing this food here and also kill of some of Su Ann’s animals so I can come in second and leech some points off Allen). Not for everyone, for sure, but it is really just a rewarding game at the end of it as you feel like you’ve really struggled to get where you are.

Flash Point is a game that I would love to love. The theme is great, the components are nice, and the basic mechanics are solid. It just falls short due to the fiddliness and amount of rules you need to take into account. I made the mistake of trying to play the full version with some new players and while I think we had some fun moments, there was just too much going on in terms of upkeep. Obviously there’s the basic game, but I think there could be another intermediate ruleset that is just a little more streamlined while still posing a challenge.

Another classic that returned to the table. Le Havre is still my favourite of the “Harvest Trio” ( Agricola, Le Havre, and At the Gates of Loyang, amusingly each published in English by a different publisher – Z-Man, Lookout, and Hall Games respectively) by Uwe Rosenberg. I just love the variety of goods that you can produce and upgrade and how they all work together. I also like that it’s the “simplest” since you only have to choose whether to take goods from an offer space or move your one worker. Of course, you get more and more options of what building you can move the worker to as the game goes on. I really like the way Le Havre does it as you really feel the build up and gain access to more options while still having limited ways to execute those options. We played with the new Special Buildings from Le Grand Hameau, but it’s been such a long time since we last played and the Special Buildings only take up a small portion of the game that I couldn’t say whether the expansion is a good addition. At the very least, it didn’t take away from the basic game at all.

A new set and a new multiplayer product were released for Magic and I got my grubby mitts on both of them. I love Comes Into Play/Enters the Battlefield effects. Love them. Ask any of my Magic playing friends, and they will sigh and nod as they tell you how I stuff my Cube with almost every good CIP/ETB creature and draft Galepowder Mages and Cloudstone Curios. So when I heard about the slight CIP theme of Avacyn Restored, I was super stoked. Oddly enough, it was the Soulbond mechanic that I loved the most in the end. I think they really hit it out of the park with that mechanic. It reads well, is flavourful, works intuitively and has a great power level in Limited. Just a really solid design and I doff my hat at whoever came up with it. We also played some Planechase 2012, and I laud the inclusion of Planar Phenomena. The new planes are once again very flavourful and fun, even though the new decks did not particularly excite me. Hao Ern would have been proud of me as I suited up a Silhana Ledgewalker with almost every Aura in the deck and beat face with it.

Quarriors! (the exclamation point is somehow important, I assume) is the next innovation in the deckbuilding genre: dicebuilding. Instead of building a deck of cards, you now build a dice pool which you can shake up and roll to score points. I like the clever little details in the design, like how each dice can match up to multiple cards so that you have greater variety while still keeping production costs down. I like how you have the creatures score by trying to get them to survive a turn unscathed. I like that you can cull dice from your pool when you score creature, giving an extra potential benefit for something you want to be doing anyways. However, I get the feeling that it’s not going to be as popular in my game group because of the increased randomness. It can get a little frustrating when you buy that great creature but never get to use it’s powers as you never get the right roll.

Rex: Final Days of an Empire

Rex is a game that I have been looking forward to for a while now. It’s a Fantasy Flight production, so the component quality is amazing. Some of the art assets are a bit busy and hard to tell apart, but that’s my usual complaint with Fantasy Flight. The core mechanics are not very complicated, but it’s the special abilities of the different races that makes for such interesting gameplay. The best thing I can say about Rex is that it creates very memorable gaming moments. I mean that in a good way, as a lot of technically great games aren’t able to create those moments. Dominant Species is the other one in recent memory that evokes such moments. Highlights of our game was Steven having the Traitor cards for almost every single conflict he was in as either a combatant or ally, including the final game-deciding one. The sneaky Letnev bested the Sol Federation, and then made reparations and joined in an Alliance with Sol and the Lazax. Seeing this, Jol-Nar, Hacan and Xxcha joined forces to combat the other alliance. Unfortunately for us, Letnev had already planted traitors in the echelons of Jol-Nar and Hacan command, who surrendered vital territories to the enemy alliance, allowing them to seize Mecatol Rex. One odd thing that happened in our game was that the Temporary Ceasefire cards were quite clumped, so we had less chances to redraw battle lines. I’m looking forward to the next time we can pull this one out and try again, hopefully with a better outcome for me! It was also quite fun to match the races in Rex to their Dune counterparts.

Alvin & Dexter is the strangest expansions to come out for Ticket to Ride so far, and may be the most dissonant expansion theme for a game series. It’s essentially an alien figure and a dinosaur figure that you can add to any game of Ticket to Ride, which will then influence where you can place routes and the value of some routes at the end of the game. We only played one game of Ticket to Ride with Alvin & Dexter, using the base game, and found that it didn’t really add too much to that game. It may have been because we only played a 3 player game and Alvin & Dexter started in fairly innocuous spots that we didn’t want to risk moving them and give an opponent incentive to also move them to mess with you. I guess we need to try it again in a different situation and see if it adds more then.

Played and it’s right there in the gallery but I have no interesting comment right now: Discworld Ankh Morpork! Dixit! Innovation! Lords of Waterdeep!

That’s all I have for now, and catches me up to our most recent Game Night (Flash Duel, Alien Frontiers and Dixit). Hopefully this won’t be the last you hear from me and until next time, have fun gaming!

One response to “Catching up on Games”