Today I listened to an excellent interview with Donald X. Vaccarino, creator of Dominion, on the Little Metal Dog Show. I was surprised to learn that Dominion had its genesis while Donald X. Vaccarino was designing an RPG-like game. It appears that the deck building mechanic was first envisaged as a way to represent a character and character abilities, but then got put aside due to some parsing issues. The idea was then revisited and stripped down to the core deck building mechanic and reimplemented as Dominion. This is really fascinating to me, in light of my previous posts about mixing deckbuilding mechanics and RPG mechanics. It looks like rather than a recombination, the idea for combining deckbuilding and RPGs is a return to the source that led to Dominion in the first place! 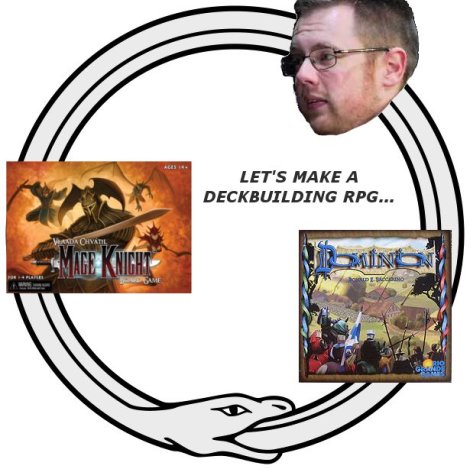 The question I have now is whether these new deckbuilding-RPG hybrids would have come about if Dominion hadn’t? I think the answer to that is probably yes, but maybe not in the same form. Looking back at the World of Warcraft TCG and even the grand daddy of TCGs, Magic, there is an emphasis on the deck of cards you built representing a certain character (heroes in World of Warcraft, and yourself as a planeswalker in Magic) and the cards representing the skills and powers of that character. That’s old hat. However, the old mode of thinking was that you built the deck before you start playing. Even if it’s a limited environment like a Sealed Pool or a Draft, you still build the deck before you first play. The build up in the game is purely the build up of the resources of the character to use the abilities he/she already knows.

What the deckbuilding paradigm changes is the notion that you build the deck beforehand. Now, you “build” the deck as you go along. I read somewhere online a while ago that there was a way to play Magic as if it were an RPG. You’d start out with a pre-built deck, and lay out land cards in a grid for locations. Some locations would have creature or spell cards you could add to your deck and summon again later. (P.S: I did bit of Googling and I can’t find the exact variant I was thinking of, so if anyone can help me out there that would be great. Otherwise, this could be the basis for another game idea…) Essentially, that was a deckbuilding RPG as well! Having never tried this mode of play, my context for coming up with a deckbuilding RPG game came from Dominion instead, but that idea could have just as easily come from playing Magic. Dominion provided an easy context to understand the many ways you could manipulate a deck building mechanic.

One other interesting bit from the interview was Donald X. Vaccarino’s comment on the distinction between “Dominion-games” and “Deckbuilding-games”. In the interview he mentioned how some deckbuilding games that were designed after Dominion’s release were more tweaks to the specific game system than new implementations of the core deck building mechanic. There’s also a great article here that examines the core mechanics of Dominion and how they relate to the core mechanic of a deck building game. There was also mention on how diverse Trading Card Games are compared to the Deckbuilding games available. I think right now it’s a matter of time and maturity.

Let’s examine Magic for a moment. When Magic first came out, it was a crazy brand new way to approach a game. Early one there were many other card games that were direct clones and re-themes of Magic with minor tweaks. At that point, you know that the system underlying Magic works, so why not just tweak it for different themes and try to fix some perceived problems? At the same time, there were also other games that really just kept the core assumption of the Trading Card Game (personal, customizable decks of cards) and went in different directions. Some eschewed resource cards, while some had wildly different rules when playing different sides, and others used the deck itself as a resource. In fact, some of the more innovative designs came from Richard Garfield (creator of Magic) himself. However, the TCG boom did not last long and many of those innovative games fell to the wayside while Magic continued to stay strong (19 years and counting…). The TCG designs are now less risky and stay pretty close to the formula set out by Magic, because the audience just isn’t as big as it was before. Also, Magic has been pretty thorough in investigating all the different possible interactions in its own existing system, which allows others to see what this one system is capable of. I’d recommend the articles on “Making Magic” and “Latest Developments” on the Magic main site if you’re curious about the process, and the ideas in there are also applicable to other games. 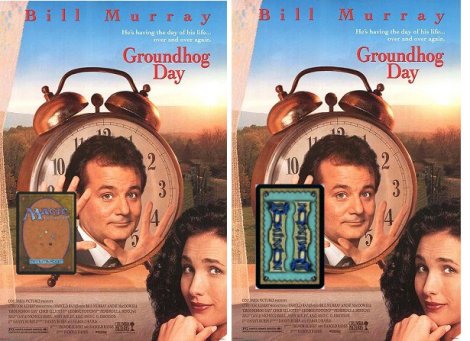 I suspect the same cycle that happened to Magic and TCGs is and will continue to happen for Dominion. Like Magic, Dominion has also been doing a good job of mining the available design space through its various expansions. Right now there are a raft of “Dominion-alikes” that merely tweak the mechanics of Dominion. There’s no real desire to change an already winning formula. However, there are also some games that just take the core deck building idea and build something different around that (Eminent Domain is probably the strongest example I know of). We’ll start to see more of these kinds of games as designers really get to digest all the implications of the deck building mechanics and come up with new ways to use it. As a gamer, I’m excited to see what brave new design space we can explore with the deck building mechanic. I just need more time to play them all…