I previously wrote about FTL, explaining some of the mechanics and concluding that I liked the game. Why, though?

The game is fairly random, and the randomness would usually be frustrating, but I find myself still playing. The sectors are generated randomly, the encounters are random, the encounter rewards are (somewhat) random, and the items available in shops are random. This leads to significantly different game experiences each time you play. Sometimes the RNG just loves you and you always seem to get the items you need when you have the scrap to spare. Other times, it seems like every shop is determined to not sell you any reasonable weapons or all they sell are drones and no drone control system.

And I keep playing.

Part of the appeal right now is still trying out the different upgrades. I just had a game with the Advanced FTL drive, which changed the way I travel. Usually I would take a roundabout route before hitting the exit beacon, to maximise my chances for fruitful encounters. With the Advanced FTL, I find I can hit up the stores and exit beacon early, and return to them at my leisure, which is a very different feel from playing without the Advance FTL. FTL’s diversity is enough that there’s plenty of combinations to explore.

The other appeal is just trying to unlock the different ships. Brand new ships are discovered through random quests in the associated alien race’s home sector. So far I’ve only got the Stealth cruiser, but I have encountered the beginnings of the Zoltan ship quest and the Slug ship quest although both times I made mistakes and did not complete them. The Stealth ship is pretty nice though. It comes with Long Range Scanners and Cloaking System pre-installed, but sacrifices Shields for them. Also, it looks pretty freaking sweet. You get it sometimes in the Engi homeworlds. The encounter will start with an Engi ship asking for help to chase down some Rebel ships that have stolen important information. You get two quest markers, one of which is a decoy and the other has the plans for the Stealth cruiser. I’m not sure if you need an Engi on your crew to start the encounter though.

I like that the other way to unlock “new ships” is through clearly defined achievements. Getting 2 out of the 3 achievements specific to each type of ship unlocks a new layout for that ship. The new layout is essentially a new ship, as the starting configuration is changed as well. I like that you have these 2 methods, one clear and one obscured. The only layout I’ve unlocked so far is the Vortex, which is the alternate layout for the Torus.

It is a pretty strange ship to pilot. You start with only one crew member, which is kind of risky. Your priority in the early sectors is to recruit a few more crew, at least so you don’t lose so easily if a lucky shot takes out your pilot. However, you start with 2 System Repair Drones and an Anti-Personnel Drone. This will allow you to still pilot the ship (maintaining evasion) while your drones handle any repairs or boarders. Your starting weapons are a Heavy Ion Cannon and a Heavy Laser. The Heavy Ion Cannon should be enough to disable a shield system while the Heavy Laser blasts at their hull. However, this combination is terrible against upgraded shields as the firing speed of the Heavy Ion Cannon is too slow to take down two layers of shields and the laser won’t be able to penetrate at all. In my most recent game, this “deficiency” led to a pretty amusing scenario. I encountered an enemy ship with a missile system and a heavy laser. I had a Defense Drone to replace one of my System Repair drones, and batted away all incoming missiles until they ran out. Both ships had two layers of shields and could not do any damage to each other at all. The AI didn’t even try to power up the FTL to escape, so the two ships just sat there firing useless shots at each other. However, each shot fired was raising the skill levels of my crew. So I just left FTL running in the background and rotated the crew through the different systems until they had all mastered all skills (except for Repair and Combat).

Having all members of the crew with mastered skills was quite fun. It was really easy to just switch them around for combat and/or repairs and not have to worry about sacrificing ship efficiency. Unfortunately, I didn’t upgrade the weapon and drone loadout right and I got creamed in the first stage of the final boss without even dealing any damage. Damn shields. 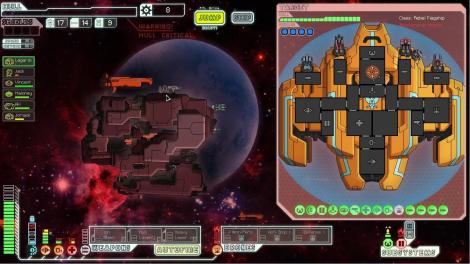 In the end, I think what I am enjoying is the challenge. I’ve yet to beat the final boss (even on Easy damnit!), although I did come oh so close. The random element makes it such that there’s no one easy way to beat the game. You always have to make do with what you can get and make sure you are sufficiently prepared for the final battle. And then you get your beautiful ship blown up right in your face because you’re such a noob that you bought the crazy good missile launcher and upgraded your weapons systems to accommodate it but forgot to stock up on missiles before the last battle. That’s the draw of the roguelike game. You do the best you can with what you get. And you do it again, until you get it right. One day, you’ll be fast enough or levelled up so high it doesn’t matter how fast you react to the blade and you kick that damn God-King’s ass off his raised dais. One day your wizard will brace the trials of the dungeon and ascend to godhood, and his name ButtskratchLOL will be echoed through all eternity. One day you’ll send ion that filthy stealth system, disable the shields and knock out the drone control system, cloak through the laser and missile barrage and send that last missile screaming into the hull of that annoying Rebel scum (or forget to arm that last missile and die. You know, whatever). And then you do it again, with a different loadout. Or with a different ship. Or maybe you just want to do it better next time.