I’m finally back in Melbourne! This means the triumphant return of Satruday Game Nights at Wells Street. However, the winds that brought my plane home also brought a heaping load of storm clouds and rainwater. ‘Twas a dark and stormy night…

We started the night off with a new game: D-Day Dice. This was one of the early successful board game Kickstarters that I remember seeing, but I’ve only managed to get a copy recently while I was in Perth. D-Day Dice is a cooperative dice game for up to 4 players where each player takes control of a unit of soldiers storming the beaches during the end of World War 2. The game comes with 8 possible scenarios of increasing difficulty. The objective is to make it from the starting sector of the scenario to the final bunker without losing all your soldiers. Each unit gets a resource tracker which tracks the 4 main resources: Soldiers, Tools, Stars and Courage. Soldiers are kind of like your health points, as you lose if you ever lose all your soldiers. Tools are used to obtain special one-use Items while Stars allow you to recruit specialists to your unit which provide regular bonuses. Finally, Courage is used to advance toward the objective.

You collect resources by rolling a set of coloured 6-sided dice. You get 2 each of the colours Red, White and Blue. The dice have the same faces, which are Soliders, Double Soldiers, Courage, Star, Tool and Skull. You have to lock in 2 dice after your first roll, that cannot be re-rolled in the round. After that, you can re-roll any of your dice another 2 times before obtaining your Final Tally. The dice results will provide the resources depicted, and Skulls will cancel out one other non-Skull result. However, if you roll 3 of the same result but each of a different coloured die, you get a RWB bonus in addition to the normal resources. The RWB bonuses are all great, granting additional resources or special actions, and are worth trying for. In fact, a lot of the items and specialists can assist in getting RWB bonuses. After collecting the resoources, each player can buy one Tool or recruit a Specialist. After that’s done, you make the decision whether and where to move. You only have a set number of turns you can stay in any given sector, usually 3 but may differ if special conditions occur. At the end of the round, each unit loses a number of Soldiers equal to the Defense value of their Sector. During the game you can trade resources with other players as long as you’re both in the same sector. So that was the basics of how to play the game. How did we do?

That night we played the first map, which was Exercise Tiger. The map is designed to ease you into the game and get you familiar with all the mechanics, thus it isn’t overly challenging. That’s not to say it was a cakewalk, as a few bad rolls and/or decisions could still ruin your (D) day. However, we stuck together and managed to build up a strong pool of resources before pressing on. Most of us hired Minesweeper and Beachmaster specialists to bolster our ranks and negate the mines. We also managed to pick up a Grenade and a Bazooka and judicious use of those items allowed us to storm through the last two sectors. We made it to the bunker comfortably, but I could remember moments when a bad roll could have made it really tough for us. Now that we’re all proficient with the mechanics, I’m curious how we’ll  fare in the other missions. Some of them look downright mean. Overall, I enjoyed the game and it integrates the mechanics and theme pretty smoothly. I was also impressed by the production values, especially the rulebook which is designed as a Regulations Book. Definitely something to check out if you’re into co-op games and the World War 2 theme.

A lot of the time was actually spent just catching up on the past 2 months. We also had a late pizza dinner, and my mum and brother arrived to stay with me for a few weeks and help me move. After all the hubbub, we managed to squeeze in 2 games of 7 Wonders, with the Leaders expansion.

I tried for Justinian in the first game, but didn’t quite manage to get the Science to really make him work. Prateek made off like a bandit, nabbing heaps of points off Science. I suspect that since we’ve all not played in a while, he managed to snag a lot of good passes. Steven had an amazing economy going, and could have struck it really big if the starting cards had gone his way as the Gamer’s Guild was present. However, I denied him the card and used it to build a stage of my Wonder. However, it was not enough to catch up to our man of science. Final Score: Prateek 80, Steven 70, Aaron 69, Jeff 58, Heng Lin 50.

The second game was only with 3 players, which is a really different animal as you see the cards come around much quicker and you’re directly affecting each other. I heard a comment that 7 Wonders is really a 3 person game that 7 people can play at once, which I found amusing and somewhat true. Once again Prateek went the science route, while I waged glorious war. Heng Lin had a bit of a kerfuffle, spending a lot of money for the resources to build scoring cards which didn’t end up helping him a whole lot. Chalk that one up to rustiness with the game. You leave to Perth for 2 months and it’s like people don’t game anymore. Tsk tsk. Anyways, once again Prateek showed that science is everything. Final Score: Prateek 66, Aaron 60, Heng Lin 52. 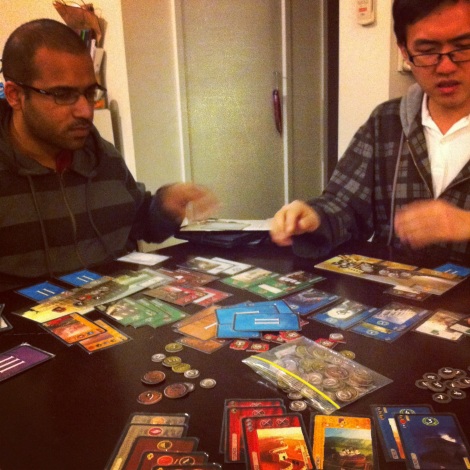 It’s really nice to be back home in Melbourne, playing games with the usual group of people. However, we didn’t manage to get a lot of the regulars the first week back, due to weather and prior commitments. It’s looking like this 6 October weekend will promise more games though, so I am super excited for more gaming and fun times. Until next time, happy gaming!