For my first post in the series, I will be taking a look at the White cards in the Cube. After this I will probably go in colour wheel order (White-Blue-Black-Red-Green), and then have one post on Gold/Multicolour cards and another one on Artifacts/Colourless and Lands. As always, you can find the link to the Cube spreadsheet at the top of the post. For those who can’t be bothered to open up the spreadsheet, here are some quick statistics for White in the Cube:

In Magic, White is usually associated with weenies, protection, lifegain, mass removal and mass boosting of creatures. It also has access to artifact and enchantment removal, flickering effects, damage prevention, tapping down creatures and some reanimation. White in the Cube focuses on many of the same themes, with the main focus being on building an army, lifegain and mass removal. For creature types, the most abundant creature types for White are:

White actually has the lowest average converted mana cost of all the colours, and a large proportion of its creatures are small. White also has the most number of enchantments and auras among the colours. The spread of the converted mana costs is concentrated in the lower region, with more spells in the 1-4 region. 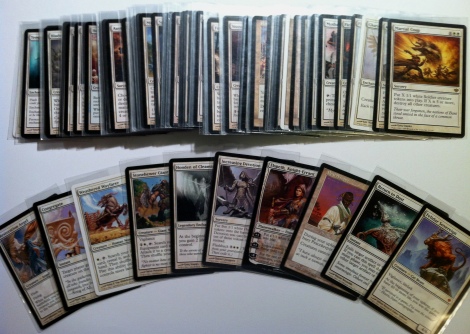 Build Me an Army of Mooks

Many of White’s cards enable the building of an army of small creatures which can also be boosted in terms of size and abilities, and also trigger benefits for their controller. The best way to build an army quickly is through token creatures. White’s method of getting tokens are primarily from “one-man army” creatures which put multiple creatures into play when they enter the battlefield or attack, and also spells that put multiple creature tokens into play. Currently both White and Green have multiple ways of producing tokens. In the coming updates, I’m hoping to delineate between the way the two colours produce tokens and will probably emphasize the “one-man army” creatures for White and let Green focus more on activated creature token creation. The “one man army” approach for White plays into its ability to bounce its own permanents and flickering effects.

White also provides ways to boost the power and toughness of those creatures to make them more formidable. White sometimes also grants abilities as well, usually Vigilance or First Strike, but are usually limited to creature types. A third class of card that plays into the army theme are the cards that benefit from having multiple creatures entering or being in play. The effects are generally tied to White’s second primary theme of lifegain.

Try Not To Die

White is also a very defensive colour. White protects the player through lifegain, damage prevention and good permanent defensive effects. Lifegain is one of the other major themes in White, with multiple ways of gaining life. The lifegain effects in the Cube are primarily repeatable, give a large amount of life or are riders on other useful effects. Due to the nature of multiplayer Magic, lifegain is a bit more useful as it allows you to outlast more than one opponent and get the time necessary to finish off multiple enemies. The other defensive method is through damage prevention, which is rarer in the Cube, as there aren’t many repeatable or permanent damage prevention effects. Finally, good defensive cards that deter other players from attacking you or make it more attractive to attack someone else will buy you the time to set up and build your unstoppable forces.

Take Them All With You

The last major theme of White is just blowing things up. White has access to many mass removal spells. Some of the mass removal also removes permanents other than creatures, which comes very handy in a multiplayer game where the odds of encountering powerful artifacts and enchantments are very high.

It Also Makes A Mean Espresso

The other minor themes of White are also present in the Cube, but not in high concentrations. Effects like flickering, self bounce, artifact removal, enchantment removal, and pacifism style effects are present, but not in high numbers. The cards available are still very strong and will get the job done. Other unique themes to White are searching for equipment and a synergy with enchantments. White has the most enchantments, and the most auras, of all the colours.

Right now I feel White is in a pretty strong place. The main themes are strongly supported and there are still many minor themes that can be explored. As I mentioned before, I might want to tweak the token producers in White as I feel that there are slightly too many token producing cards at the moment and it has a large overlap with Green.