For my second installment, I will be  looking at the Blue cards in the Cube. As always, you can find the link to the Cube spreadsheet at the top of the post. For those who can’t be bothered to open up the spreadsheet, here are some quick statistics for Blue in the Cube: 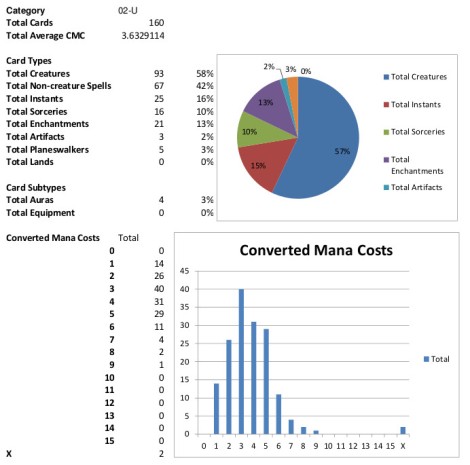 In Magic, Blue’s main themes and mechanics are card draw, card selection, countermagic, bounce, stealing, milling and flying creatures. Besides the main themes, Blue also gets to take extra turns, redirect spells or abilities, copy creatures, tapping and untapping creatures, and has a synergistic relationship with artifacts, instants and sorceries. Blue in the Cube focuses on the classic control strategies of card advantage, countermagic and stealing creatures, with a healthy dose of milling and copying effects. For the Tribal focused players, the most abundant creature types for Blue are:

Blue has the smallest average creature size of all the colours, with a larger proportion of small creatures compared to others. This is due to the fact that most of Blue’s creatures are utility creatures focused more on providing a beneficial effect than for combat. That’s not to say that Blue’s creatures are weak, as Blue still has access to some potent fatties in the Leviathans. Furthermore, some of Blue’s creatures actually copy other creatures and are listed as small creatures even though in effect they may become pretty huge… Blue also has the most instants of any colour, which makes it the best reactive colour, and also has 3 cards that are also artifacts, which shows its positive relationship with artifacts.

Milling lets you add an additional vector of attack to Blue’s arsenal. Especially since we usually play with minimum 40-card decks, milling is a pretty viable alternative to defeating an opponent. Blue has dedicated milling cards as well as incidental milling through making other players draw cards. Blue also has a small subset of cards that let you copy spells from opponents’ graveyards, which works well with milling. There is also one card that lets you win the game if you have no cards in your library, which is great if you turn those milling cards on yourself, which then also works with White and Black’s reanimation effects. Blue doesn’t want you to play with your cards. Blue wants you to stare longingly at them in your graveyard, thinking “If only I had that”. Blue mages are dicks.

I’ll Take That, and That, and I’ve Always Wanted One of Those

Blue is the colour of card advantage. The Cube is packed with card draw and card selection effects for Blue, providing Blue players with the most options through the course of a game as they will have access to more cards and can improve the quality of the cards that they do draw. Blue also provides effects that trigger off card draws, but to be honest just the option of having more cards is immensely powerful. Blue wants to have the most options. More than anyone else, with their puny one card per turn. Blue mages are dicks.

Blue mages love saying “No”. On some rare occasions, they even get to say “No, but…”, and then sploosh all over the table. They want to hear other players say “Please, sir, may I?” or “Boy golly, could I possibly?”. Blue mages are dicks.

The other minor themes of Blue are also present in the Cube. Cards like Tinker and Master Transmuter represent Blue’s affinity for artifacts. There are also plenty of bounce effects like Aether Adept and Cyclonic Rift, and ways to take extra turns with Time Warp and Lighthouse Chronologist. Blue also has defensive cards like Fog Bank and the tappers and untappers. Blue also gets some Morph creatures and also some blink effects, like Deadeye Navigator and Nephalia Smuggler. Finally, it also has ways to manipulate counters on permanents with Viral Drake and Clockspinning.

Blue is pretty strong in the Cube, as it has very powerful effects. Card drawing and stealing permanents will always be good. My goal for Blue now is to slightly increase the number of spell copying effects and give the creatures a little more identity. I’d like to incentivise players to consider Tribal synergies for Blue as they do with other colours, and I still haven’t found the right mix yet. Most times, players aren’t going to Blue for the creatures anyway, but I’d like there to be an option.

I think milling is pretty strong right now, particularly with the Blue-Black cards. However, I want to add some more milling cards that work better in multiplayer and increase the number of cards that let other players draw cards, as I like the tension but also the increased fun for everyone at the table. Also, another theme I’d like to revisit is the synergy with instant and sorcery spells. There is a little bit of it in terms of returning instants and sorceries to hand, but I’ll be keeping an eye on the card mix for the next update.