It’s time to take a gander at Red in the Cube. If you would like to investigate the Cube makeup in detail, you can find the link to the Cube spreadsheet at the top of the post. Otherwise, here are some high level statistics for Red in the Cube:

In Magic, Red is probably the most aggressive colour. Red’s cards usually help it end the game as quickly as possible. By far the most defining trait of Red is its suite of burn spells. Red gets heaps of spells that deal damage directly to a player or to creatures, and is the most efficient at it. Its associated creature mechanics like haste, firebreathing and trample let its creatures hit faster and improve their damage potential. It also gets to steal creatures temporarily, usually to remove potential blockers.  For creature types, the most plentiful creature types for Red are:

One of the challenges with Red in a multiplayer environment is the risk of running out of steam too early. Traditionally, there has been an abundance of cheap Red cards that form a critical mass of efficient creatures and burn to take down an opponent before that happens. If Red can’t seal the deal quickly, it risks being outclassed later in the game. This is exacerbated when multiple opponents are involved, as the time you take to kill one opponent is time not spent killing another opponent. Furthermore, Red usually does not have many defensive cards, and the focus on aggression could leave a Red player very open to other players ganging up to take them out. In more restricted multiplayer formats like Two-Headed Giant, Emperor or Star, this problem isn’t as acute. I’ve tried to improve Red’s late game in the Cube as well as ensure that even its early game cards have ways to remain relevant. It’s still an ongoing challenge, and I’d love to hear from other multiplayer Cube designers on how they handle Red. 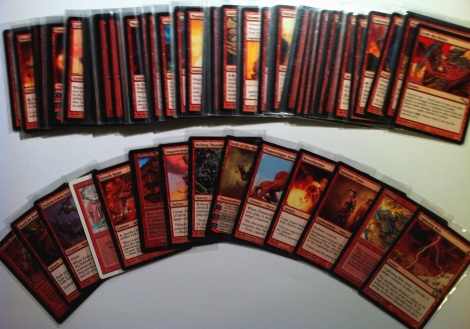 Some People Just Want to Watch the World Burn

Red is the Grand Poobah of burn. Direct damage is a cornerstone of Red’s identity. The only other colour that comes close is Black, and that is usually tied to the life draining theme and is not as efficient as Red’s burn. The problem with burn in multiplayer is that most of it is tied to one shot instants or sorceries, and you might not have enough burn to deal with 4 opponents at once. You could try to play the table and pit the players against each other before mopping up later, but that doesn’t always work – or it works really well…once. I’m trying to tweak the burn suite in the Cube to offer more repeatable effects as well as ways to reuse those burn spells. The other option is to increase the amount of burn that can hit multiple players at once. It’s definitely still a work in progress, and is one of the areas I will be keeping an eye on for the next update for Red.

In terms of variety and flexibility, Red gets burn that hits single or multiple players or creatures. It also has cards that boost the damage output of its spells as well as cards that benefit from direct damage being dealt.

Red is the premier colour of haste. A lot of sweepers get played in multiplayer, due to the need to deal with multiple player’s creatures. Usually after a sweeper hits, you still get a turn’s reprieve even if people rebuild immediately as summoning sickness wears off. Not Red. Red is first back into the fight with numerous haste creatures or ways to grant haste to creatures. Also if you’re ever tapped out and relying on a small amount of blockers facing a Red player with not many creatures but lots of mana and cards in hand… You’d best be prepared to deal with a possible face smashing. Red also gets ways to circumvent blockers entirely and allow its creatures to deal damage when they come into play. Super haste, if you will.

Ooooops. I Think I Broke It

Red primarily deals with creatures with damage, but is also proficient in the destruction of other objects. Red destroys artifacts not because it is opposed to their use (like Green), but because it just relishes destroying things and there’s nothing more satisfying than smashing a finely tuned magical instrument into smithereens for Red. Red is also the main colour for land destruction, and many of its spells let it destroy either artifacts or lands. I’m putting some land destruction in Red more to deal with problematic non-basics than to enable a true mana denial strategy. In multiplayer, you’re more likely to encounter problematic artifacts and lands, and it’s nice to have that safety valve in Red.

Oooh Lemme Try That Too!

The last major theme of Red is one that it shares with Blue, which is making copies of things. Red’s method of copying creatures is usually temporary, either by making tokens that get sacrificed at the end of turn or “copying” a creature by stealing it for a turn. It also gets to copy and sometimes redirect non-creature spells.

Other Uses Include Burning Toast, Burning CDs, and Burning Fevers

Red does some other things in the Cube too. It has the most amount of “random” spells, which has the effect of increasing chaos in a game. Cards like Scrambleverse and Illicit Auction have the potential to rewrite the game state. It also has a couple of effects that prevent lifegain, which can be problematic sometimes. It can also create tokens, usually one shot effects that create goblins. Compared to the other colours, Red can seem a bit narrower at times.

Historically in this Cube, Red has been the trickiest colour to work with for multiplayer. For the next update, I’m hoping to tweak the burn suit to have more cards that damage multiple players as well as see if I can give it more utility spells. Copying and redirection could be increased, and I definitely want to have more cards that allow you to reuse instants and sorceries.

One response to “State of the Cube – RTR Update Part 4: Red (Light Company)”