There’s a certain context missing to the debate/discussion around the sexism in Dragon’s Crown. If you haven’t read the articles or seen the trailers, here’s a recap: Dragon’s Crown is a 2D brawler with stunning artwork, but heavily (to the point of being grotesque) sexualised female characters. Were’ talking disturbingly large, exposed breasts with child-like faces. Nothing we haven’t seen out of shonen manga, or… so much anime.

Jason Schreier wrote up an interesting article, with some potentially childish language. He needed to fired off a follow-up article as an apology for some of his terminology, but mostly to draw attention to the homophobic response given by the lead artist, George Kamitani.

Mr. Kamitani, upon hearing the suggestion that his art direction was comparable to that of a 14 year-old boy decided that the best way to get his own back was to draw some homoerotic artwork in the style of the game and suggest that such a tone was probably more up Mr. Schreieder’s alley. Obviously an excellent response. Wait, what? 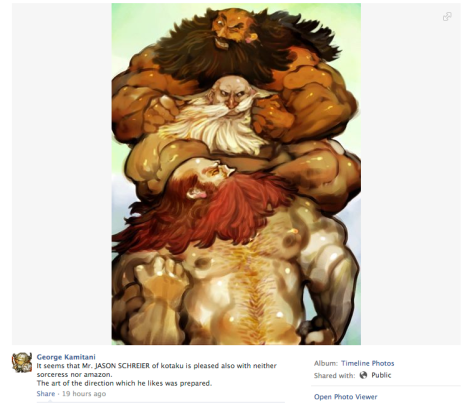 Now, that homophobic slur might seem shocking to some in the context of their own sensibilities. Or perhaps not.

It didn’t surprise me. And not just because HUGE breasts were present in their last fantastic title, Muramasa: The Demon Blade.

If you’ve watched much anime, particularly those aimed at older teens/young adults, you’ll know that homosexuality as a punch-line is a staple in many shows. My recent watching and re-watching of Ixion Saga DT, OreImo and Nodame Cantabile reminded me how far a culture that is generally getting more progressive has to come in their depiction of homosexual characters. Regardless of your ideas on homosexuality, these shows often don’t offer human dignity to their gay characters.

Now we have some context for the response, but let’s look at the original issue that Schreier and many others raised: Those giant breasts. If you didn’t watch the trailer linked to earlier, you’ll see the problematic depictions of the Amazon and the Sorceress. The perceived issue is one of inclusion and image. Either we’re reinforcing impossible, negative stereotypes of what is attractive, or we’re catering to the male gaze by having our females as sex objects and our men as power fantasies, thereby excluding many women from enjoying the game. I see both of these issues as problematic. I also see my own inability to fully enjoy such gorgeous artwork on the grounds of particular character designs personally difficult. My wife felt ill just looking at the trailers.

The context for these games is a gendered Japanese games industry. Their games industry mirrors the rest of their popular media. Manga is cordoned off into groups based on an audience’s gender and age. There is shōjo, shōnen, josei and seinen, and that’s without delving into the popular erotic, audience-based genres. What we’re given here is a shōnen game: It has sexualised female characters, violence, skill-development along with other common elements to the broad genre. It’s very much like the pulp comics popular in the middle of last century, catering to male fantasies, often to the exclusion of a female audience. We’re a long way from seeing our own media completely breaking free of the tropes that hold us back artistically (New Girl‘s recent depiction of Angie the stripper as a character with potential, which ended after three episodes with a “stripper steals your stuff” gag was a personal reminder), so it comes as no surprise that this Japanese game aimed at young men follows the tropes of a well-established and often troublesome genre. The sexualisation of children is another feature of the shōnen manga and anime that often comes up.

This particular incident is a reminder that sexism and homophobia is alive and well. It’s more common than just a set of giant boobs in a videogame. The roots are much deeper in social behaviour and what is normalised by the media we consume. What is more concerning than the fantastical violence of our media is the everyday behaviour depicted. We’re told that women are a prize to be owned, men will save the day and gay people are a joke.

Hear it from a teacher: Just spend some time in a high-school yard to hear what “girls can’t do” and why “he’s such a fag” and you’ll see why sometimes things are more important than “prudes being prudes”.