I almost missed The Manhattan Projects Vol. 2 on the shelves of my Friendly Local Comic Book Shoppe. This is what you get when you design the front cover to be so similar to the first volume, which was a problem I also had with the Adventure Time trades. Seriously you guys, get on it. You have stacks of alternate covers for the floppies and can’t get one that isn’t the exact same colour palette and style? Brand recognition, schmecognition, gimme some contrast I say. I get it, I can tell the difference between Albert Einstein and an irradiated skill holding a second-hand (mouth?) Mentos, and I guess there is a giant number on the front cover. You know what? I’m ranted out. I’ve made my peace with the cover.

Right. Now how about what lies between the covers? (Other than Yo Daddy. Yeah. I went there. “Hunting trip” amirite? Hunting for bear.) Quick recap: The Manhattan Projects is about “Hey guys, what if the frighteningly smart people at the Manhattan Projects weren’t just building a bomb but also lasers and transdimensional travel and evil twins mmkay?”. Evil alternate reality Albert Einstein. Psychotic multiple personality cannibal Oppenheimer. Dead President artificial intelligence. Zen death monks. Aliens. Boom. Which brings us to Volume 2. The Manhattan Projects team has to deal with the fallout of reaching clumsily for the stars with an irradiated man-bomb.

We start in the past, looking at poor Helmutt Grottrup and how he just can’t catch a break. The first chapter shows him being abused by von Braun and escaping during the attack on their castle, only to fall into the clutches of the Russians. As with all the flashbacks and weird dreamscape interludes in this series, there is a strong, purposeful use of reds and blues to reinforce the main themes being explored in these scenes. It all comes to a head toward the end of the chapter, showing the parallels between Grottrup’s service to von Braun’s team and to his Russian captors, and how depressing it is for him to fall back into this servitude after almost attaining freedom. Grottrup is really the whipping boy at this point, but I’m curious whether this is a setup for some future reckoning on his part. I guess his portion of the story also serves to introduce the Russian counterpart to the Manhattan Projects: Star City. I really liked the continued use of the colours and the recurring theme of duality, which I thought was handled very effectively in this part of the story.

The team at the Manhattan Projects, understanding the enormity of their actions in the first volume, realise that they need more than just one country’s resources to prepare the world for interstellar contact. Thus, they propose to join forces with Star City and even transcend each of their national interests to tackle the problem that only they are fully aware of. This doesn’t sit well with the powers in charge i.e. crazy cult leader Harry S. Truman and the other Illuminati in the shadows. The Rulers decide to rein in the impudent science-jockeys and unleash their ace in the hole: A.I. President Franklin Delano Roosevelt. The FDR AI has been given control of various robotic suits which then go berserk and it is time for full on crazy scientist on robot mayhem. This part I wasn’t too interested in, and was the first time on this series where I was almost disappointed. It just felt like a shoehorned in battle that didn’t deliver any of the crazy batshit scenarios that this series has been so good at. I guess the Illuminati were pretty freaky? But then they didn’t actually do all that much, since the FDR robots did most of the heavy lifting (killing). I guess Yuri Gagarin and Laika got to do some totally badass fighting and Einstein on a chain gun? Also we see Enrico Fermi’s battle form. Still some pretty crazy stuff, but I felt not as fresh as usual, which probably shows the high standard that has been set as a standard in this series. 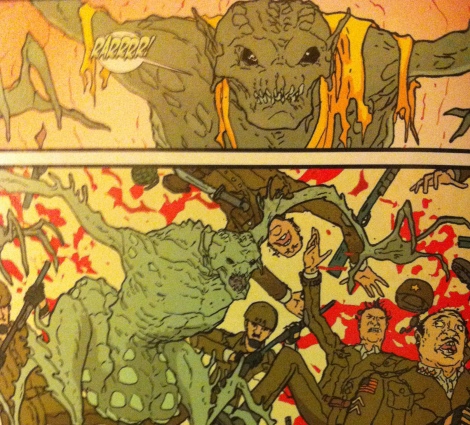 Anyways, Team Science wins the day and now with Kennedy not knowing what they’re really up to, they can pretend to work on the space programme while pursuing their own agenda. The final scene reminds me of the ending of Nextwave. What do we do now? Whatever we want. Cue Horatio glasses, slow dramatic walk off and explosions everywhere. Or a slow pull away to a long shot to an extreme long shot. Whatever you want, baby. That’s pretty cool, I guess? What’s the next conflict though?

WHAM BAM HAH! It’s the debut of Robert Oppenheimer himself! The real one. Well… his manifestation in his twin brother’s crazed psyche anyways. The final chapter of the book was my favourite as it sets up a truly fascinating next arc. Robert Oppenheimer finds himself trapped inside Joseph’s mindscape and manages to turn some of his personality shards to his side. Once again, fantastic use of blues and reds to differentiate between the bits of Robert and Joseph’s consciousness and some really nice imagery inside the mind of the killer Oppenheimer. Next time, we are promised the Oppenheimer Civil War! Probably going to be better than Marvel’s. 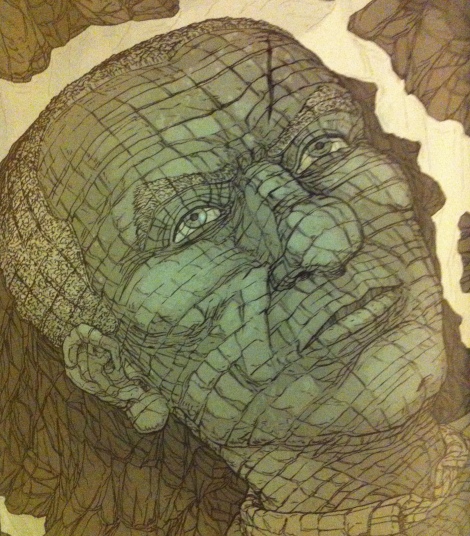 I cannot stress enough how much I enjoy The Manhattan Projects. It’s smart, it’s fun and it’s engaging. It’s crazy, it’s weird and it’s disturbing. Whatever it is, it’s not boring. Go out and grab a copy today. Both volumes. 4.5 out of 5 Fermi ass-kickings.

One response to “The Manhattan Projects Vol. 2”