I love reading comic books, but I don’t have a lot of space in my apartment, so I generally just wait to buy the trade paperback collections when they’re released. Yes, I’m one of those. I do keep up with upcoming series through the Comixology app, but I usually limit myself to around 3 issues before I decide to wait for the trade. This way I know whether I’m interested in a series but I still have something new to read when I get the trade. As such, the list will be mainly trades I’ve read this year.

I also limited myself to books or series that were new to me this year and I’ve listed ongoing series that I continue to follow in the “Still Going Strong” section. I also briefly mention series that I’ve started but have decided to wait for the trade at the end in the “Keeping an Eye Out For” section at the end. My reading proclivities are mainly in the second tier mainstream, which means pretty mainstream publishers but not much Marvel and DC. Also, similar to my other lists, I’ve included older books that I’ve only gotten around to reading in 2013. Without further ado, my favourite comic book collections of 2013: 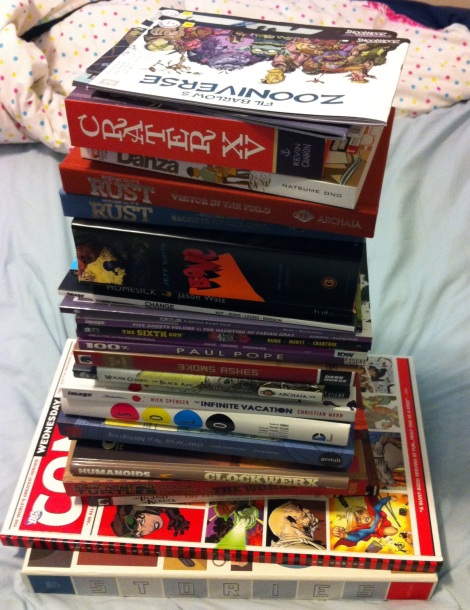 Adventure Time Comics (ongoing series, Marceline and the Scream Queens, Fionna and Cake, Playing with Fire, Pixel Princesses, Sugary Shorts) – 2013 saw the continued expansion of the Adventure Time comic book line (unfortunately still unavailable on Comixology in Australia as of this writing), with the addition of the Marceline and Fionna limited series and the graphic novels. I really liked the exploration of the relationship between Marceline and Princess Bubblegum in their own mini-series and the relationship between Flame Princess and Finn in theirs. I also liked that the series as a whole has really cool, interesting female characters that really stand out. The series also seems to have become a great avenue for great webcomics creators to showcase their talent to a wider audience, and I’m really glad for that.

Blue – Pat Grant’s elegantly illustrated examination of childhood memory, exclusion, prejudice and surfer culture was a delight to read and learn from. The main story was already great, but the included essay on surf comics was also something that really broadened my appreciation for the history of the comics medium in genres that I was completely unfamiliar with.

Bravest Warriors – I kinda lump Bravest Warriors with the Adventure Time comics under the “also originally created by Pendleton Ward” label, but it is no less funny, charming, entertaining or mildly disturbing. 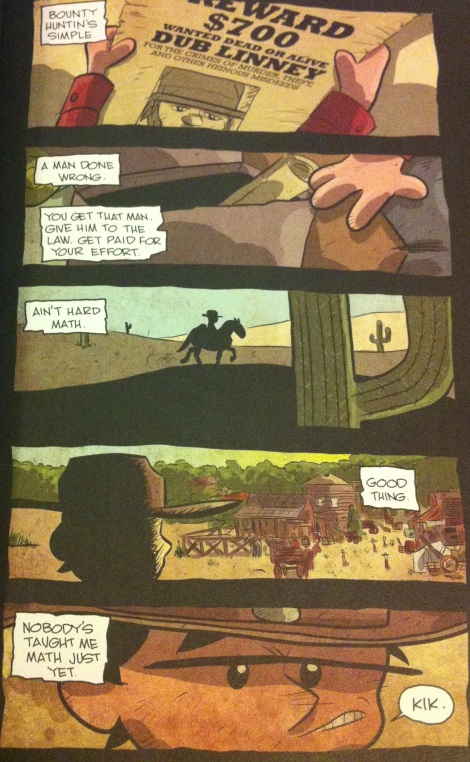 Cow Boy – At first glance, it’s kind of amusing and charming that a kid is riding around with his toy-horse-gun rounding up his no good family members. He’s also a total bad-ass. Then you read his conversation with the African American man in the barn, and finally his heartbreaking confrontation with his grandfather, and you realise that this isn’t just some cutesy adventure. A surprisingly affecting read for me.

East of West – Jonathan Hickman’s other super stylish series about bad people doing bad things to worse people, this time with a mechanical horse with a gun for a face and a killer Mao. A great setting, some cool shit going down, and possibly the end of the world again. You’ll want to see this.

Finding Gossamyr – A beautifully illustrated all ages book that uses some very familiar tropes (kids stumble into parallel fantasy world with great powers). However, the thing that I really liked was the presentation of the relationship between the two siblings and how they cope with Denny’s at times frustrating behaviour. (While trying to remember Denny’s name, I stumbled onto this review, which summarizes their relationship so well I’m just going to point you to it).

God Hates Astronauts – Off-the-wall crazy and just fun. There’s a disembodied cow’s half-head stuck onto a man’s body out for combined vengeance on an ugly cowboy, bear boxers/ninjas/wizards/whatever, and lots of owl puns. Lots of them.

King City – Less owl-specific puns, but way more saturated with both lingual and visual puns of all kinds. A cat master deals with his ex and ghosts while his best friend tries to rescue an aquatic slave in the pun-filled streets  of King City. A joy. 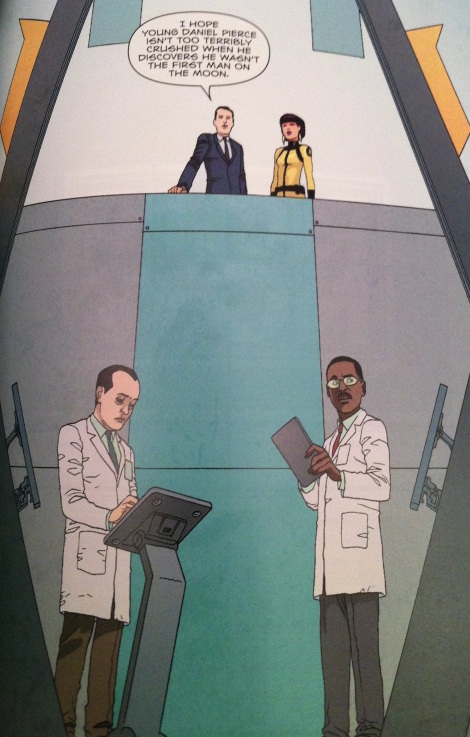 Orc Stain – The vibrant art really sold me on this one, but it’s also a cool adventure with an orc who can always find the weak point in any object, a bad ass poison thrower scary swamp witch person, and sliced off orc penises used as currency. Niiiiiiiiice.

Planetary Volume 4 – I realised I never finished reading Planetary and finally did it last year. Incredibly satisfying, and re-reading the early volumes after learning some more about the characters/genres they were referencing was a treat. In a similar vein to Astro City, where it pays loving tribute to various parts of comics legacy.

Young Liars – The whole 3 volume series ended in 2009 but I only discovered it on 2013 when I realised it was done by one David Lapham, author of Stray Bullets. The first volume is an unflinching look at twentysomething scrappers in the big city getting embroiled in a high-stakes chase when they realise that one of their own is worth a whole lot of money to certain interested parties and has also become joyously uninhibited after getting  a bullet in her brain. Then it goes craaaaaaaaaaazy. Weird, mindfuck-y, and so damn cool.

While the new books have been impressive, the ongoing stalwarts like Atomic Robo, Chew, Empowered, Mouse Guard, The Manhattan Projects, Skullkickers, The Sixth Gun, The Unwritten and Saga are still going strong and had some great moments this past year. I  loved the Sky-Fi setting of Atomic Robo and the Flying She-Devils of the Pacific. Empowered got another chance to show off her capabilities and Tony Chu took a whole new level in bad-ass. We saw how Marko and Alana first met and deal with tragedy in the family. The participants in the Manhattan Projects come to grips with betrayal and the Oppenheimer Civil War begins.

Keeping an Eye Out For

Not content with all the quality comics collections and graphic novels released last year, I also looked into some issues for great new and returning series. Astro City made a long-awaited return to the comic pages and I can’t wait to add another book to the collection. I also started reading Jupiter’s Legacy, Lookouts, Pretty Deadly, Sex Criminals and Six Gun Gorilla, which have all got me watching the schedules for when the collections finally get released. There’s also a heap of Issue #1s still awaiting my perusal on Comixology. Overall, 2013 continued the growth of really great comics in the mainstream arena and I am really excited for even more to come.