Today’s reviews will cover 4 games tied together by ridiculous names, a trio of which make for excellent couch-based multiplayer gaming. I’ll begin with the loneliest game I’ve played in a while…

Say it with me. NaissanceE. Do we use the French pronunciation? Do we pronounce that final “E”? Does it matter? No. To give a frame of reference, NaissanceE plays like Journey if it were crossed with Portal 2. It shares Journey’s lack of formal speech and at times colour palette, giving the player the feeling that whatever lived in the world may have been and gone. Machinery will occasionally respond to player input, but I never really felt like anything was truly alive. 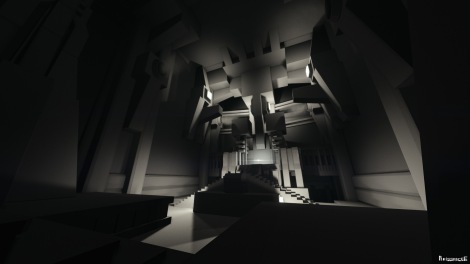 The gameplay consists of first-person platforming, which for the majority of the game winds the player through a relatively linear pathway, punctuated by puzzles and tricky platforming peril. After walking through cramped corridors which opened up into abandoned cityscapes of incredible brutalist architecture, I found myself confronted with a sense of scale I hadn’t witnessed before. I felt real vertigo as I navigated maintenance access paths on the side of giant skyscrapers in some underground city, where I seemed to be the only thing affected by gravity. Treacherous stairways offered a long-fall, scenic death if I was a little clumsy with the keyboard. There was something human, but in no way comforting, about the presence of blocky bars, strip clubs, apartments and libraries, devoid of booze, bodies or books.

After a while it became clear that achieving an atmosphere was the real purpose of the exercise. And atmosphere was achieved. In my time with NaissanceE I could see real parallels between it and Outlast, not merely because of the constant sounds of heavy breathing coming from the player. This leads to one of my very few criticisms. The breathing. It never gets aurally irritating, but the need to regulate the player character’s breathing with a mouse click every few seconds while the sprint button is held down never really added anything to the experience. When I forgot to allow myself a breath in, or if I’d breathe in before the character had breathed out, I’d either choke or hyperventilate, with repeated failures offering a simulated dizzy spell. Although I understand the complexity it adds to several of the sections that require sprinting to navigate, I felt that the platforming elements were difficult enough without this extra task.

And therein lies another issue that might hold back this experience from achieving as wide an audience as possible: I said some very rude words during some of the trickier sections. Save points seem to lack common sense placement and some of the platforming requires the kind of precision not particularly suited to first person games. Although there’s some evidence of guidance in places, much like Portal’s clever auto-adjustment system, it seems inconsistent and downright devious in spots. For this reason, the developers’ suggested 4 hour play time runs at closer to 6 or 7 hours I would suggest. This could be even longer if stumped by one of the interesting, but sometimes obscure puzzle solutions.

There were times when I wasn’t sure how much of my journey was a mental one – invoked in the mind of the player, sent mad by the isolation and deafening solitude of the exploration. If you feel like a dose of madness, or want to feel insignificant and alone, I’d thoroughly recommend giving NaissanceE your time and money. It speaks to me as a gamer, by showing what games can look like when we stop looking at them as simulations of real world activities, but instead try to unlock the potential of our imaginations. Much like with Journey, you might find the $20 price point a little steep and even though I grabbed it on sale, I’d personally vouch for its value at full price.

***EDIT*** Since this review, the team has released a patch fixing almost all of my issues with NaissanceE. Truly they are worthy of much praise.

The other 3 games I’ll briefly look at make up a fantastic bunch if you’re lucky enough to have a PC connected to your television and several wireless controllers to pass around. They each offer surprisingly robust tournament modes if you have a limited number of input devices.

I’ll start with Starwhal which, while not fully out of Beta as of this post going up, shows plenty of potential. What’s on offer as of now might not sit comfortably at the $10 price point, but with everything promised, it looks to be a great package. You might also enjoy the Archer reference in the title. Like the best pick-up-and-play multiplayer titles, Starwhal is simple, with the potential for skill development over time, but never so much that a veteran and newcomer will have difficulty sparring. The concept is simple: You are a narwhal in space on a 2D plane with a loveheart on your chest, trying to touch the other players’ hearts with your horn to either destroy the other players, or gain points, depending on the mode. One button propels you forward and you steer, rotating either left or right (we used Xbox 360 controllers to test out all three of these multiplayer titles). It’s hilarious watching all the players flounder about, flopping like the mammals/fish/space creatures they are. There are visual customisations referencing pop culture and other sight gags. The visuals look like something between Robot Unicorn Attack 2 and Far Cry 3: Blood Dragon in their camp 80’s style. Starwhal might just be one of the funniest couch multiplayer gaming experiences out there. It’s fast, fun and silly. 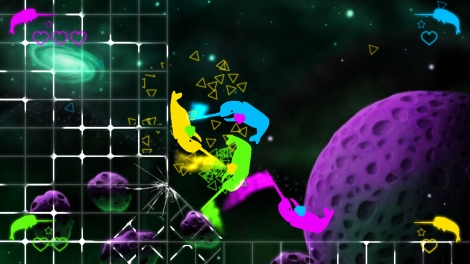 Nidhogg is a fencing simulator (The Zorro kind, not the containment wall kind) with a pixelated art style and tight, fast controls, offering a veteran to the game a clear advantage. The goal is simple: The player who starts on the left must progress to the right, and the player who starts on the right must progress to the left. Each player carries a sword which can be thrust at three different heights, or thrown at the other player. The purpose of progression is so that the winning player can run through an arena, past a cheering crowd and dive into the mouth of a hungry worm monster. For a game with such a fantastic multiplayer experience, Nidhogg has a surprisingly robust single-player mode, facing the player off against tougher and tougher opponents in more and more ridiculous and potentially seizure-inducing environments. The pixel animations are fast and smooth and visually humorous. Maps soon get drenched with the yellow, pink and orange blood of the fallen. Respawning is fairly instantaneous so even if you’re getting thrashed, you won’t we waiting long post mortem. At $15, there’s probably less to Nidhogg than some other multiplayer offerings at a similar price, but the inclusion of a tournament mode sweetens the deal. The word “trippy” is thrown around willy-nilly, but that’s exactly what it is. From the nonsensical environments to the undulating backgrounds, you’ll feel like Nidhogg’s been chemically induced.

Imagine if you stripped Super Smash Bros. down to bare-bones visuals, upped the speed, made each hit kill instantly and gave characters 2 weapons – a sword and a pistol with limited bullets. Okay, maybe it’s not so much like Super Smash Bros., but you get the idea. Samurai Gunn is a lightning fast 2D brawler, with a super low-res pixel art style (see a trend here?) and it’s great fun to pick up and slaughter your friends. With each kill, the camera zooms in on the action, in the style of old samurai movies, and very soon the screen is littered with pixelated corpses and blood splatters. Players immediately appear at the opposite side of the screen if they go off any of the four edges (there are levels where you can fall continuously) and each level may be populated with falling stalactites, moving platforms, sticky gel or bamboo that grows and must be cut down. There are several game modes, and single-player options, but what really makes Samurai Gunn stand out is the style and pace. Your imagination fills in the details on warrior monks and humanoid fighting rodents, and even though each character plays identically, it offers a sense of story and style with the cinematic (in a sense) and frenetic action. At $15, it’s good value for a dedicated and stylish 2D brawler. If you have the set-up, grab it. 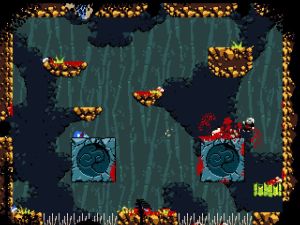 That’s the end! You made it! I hope that’s food for thought if you happen to be in the very specific situation in which you need a variety of tournament suitable, couch multiplayer games that don’t require the mental investment of a traditional 2D fighter. Happy brawling!

One response to “The Keyboard-Mashing Approach to Naming – NaissanceE, Starwhal, Nidhogg and Samurai Gunn Reviews”