At the most recent WABA Mount Claremont meetup, I had the pleasure of joining in on a game of Airlines Europe. I had previously heard good things about Airlines Europe as a satisfying mid-weight game, so I was keen to finally try it myself. Interestingly, Airlines Europe is a re-implementation of two previous Alan Moon designs: Airlines and Union Pacific. A couple of people in our group had played Union Pacific before and we had the owner of the game with us, so explanation and setup was a breeze.

The rules of the game are fairly simple. You have a board that has airline routes between various cities in Europe, and some starting locations for each airline in various colours. Each airline also starts at a different space on the scoring track around the board.

On your turn, you can take 1 action, choosing from 4 available option. Firstly, you can expand airlines by paying money to claim spots on connected routes. You can expand on up to two different routes by placing the corresponding coloured airline piece on the route space, and then you can collect one share card from the share market. As you expand an airline, its value goes up on the share track based on what routes have been connected, and the share cards are important as they determine majorities in the airlines during the scoring rounds. As your action, you can play share cards down (either a run of the same colour or 2 of different colours) and collect money for each share played.  You can also choose to instead invest in Air Abacus by exchanging existing share cards with Air Abacus share cards. If none of the previous options are possible or desirable, you can also just collect some income. 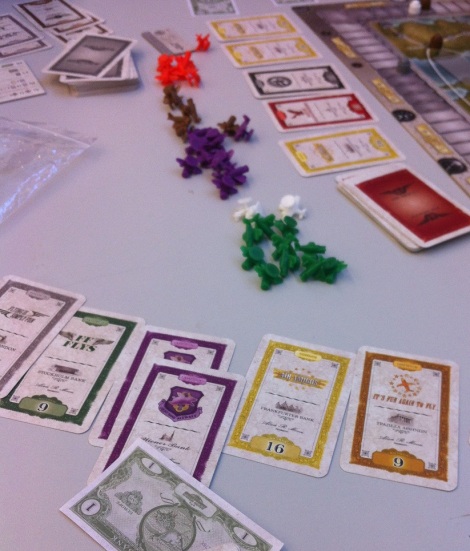 The share market deck contains 3 scoring cards at the early, middle and late stages of the game, which trigger a scoring round when revealed. During scoring, each airline rewards points based on which players who owned more shares (that have been played) in that airline. The higher up the share track the airline is, the more points it awards during scoring. You also get points for investing in Air Abacus depending on which scoring round it is, which is actually quite lucrative. Air Abacus is not represented on the board at all, so the investment in it is not reliant on expanding routes. Once all the scoring rounds are complete, the game is over and whoever scored the most points wins.

I actually enjoyed Airlines Europe quite a bit. The system is pretty simple to explain, but it still takes some savvy play and a bit of luck to get ahead. The expansion and investment is very streamlined which is a boon to new or casual players, yet still evocative enough of the basic theme. I thought it had just the right amount of rules and complexity, and we managed to finish in just about 90 minutes. There’s no direct interaction, but you do have to constantly keep track of what shares have been taken and played by others and you could block off lucrative routes (especially since there are route bonuses for certain airlines). There’s also the opportunity for table talk as we wheedled each other to invest in the airlines we wanted to invest in, and also hope that we each had enough shares to maintain the lead.

The one complaint in the group was the luck involved in the availability of shares on the market, but you can mitigate that with clever investments in multiple airlines. I felt like I always had good options to either invest in another airline or expand my current scoring airline, so I didn’t mind the random share availability. I also liked the option of Air Abacus as an alternative investment, as you could give up shares in airlines which you know you won’t score much on for potentially more points.

The component quality was also very good, with cute plastic planes to mark the routes and a very clear graphic presentation. I did think that the victory point chips could be done away with and replaced with a scoring track. The owner of the game said he usually just kept score with pen and paper, but he was bereft of them on this particular occasion. Other than that, I think the art and component quality were nothing super exciting (besides the nice plastic plane pieces) but very functional. I always did prefer functionality over aesthetics though, so this isn’t really a knock on the game.

All in all, I enjoyed Airlines Europe enough to consider picking up a copy. It fills a good space in a collection, since it is a nice mid-weight game that can serve as a gateway but also has a somewhat uncommon theme. I give it 3.5 out of 5 Frequent Flyer Status Credits.