It’s time to take a long, hard look at ourselves and find out what we truly are. Are we human or are we dancer? Along this vein I hope to explore some notable titles or television shows outside the realm of Marvel/DC/Hollywood/male-centric garbage streams, whose specific genre(s) target and depict people from a variety of lifestyles and interests. In several earlier posts I’ve broken down the Japanese gender-age-(sexuality)-genre system (More on Bara next time, perhaps?) and will examine or review some works of note.

Hopefully we’ll see how freeing ourselves from focusing on a preferred genre will open up a glorious world of media with which to enrich our existence.

So let’s get things going with some tales of lovely men.

Far from our action heroes and detectives, we have a couple living a life of social discomfort and culinary delight in What Did You Eat Yesterday?, a manga series centred around the joys and difficulties of being gay in Japan. Fumi Yoshinaga’s award-winning series offers a slice-of-life Josei manga and cookbook, rolled into one stylish package. Each chapter offers a recipe, complete with ingredients lists and preparation instructions (often with modifications to suit different palates) and a look at the problems faced by a gay couple in a modern society.

In the first volume we see how different families address the issue of sexualities, how colleagues and friends can react to gay people, and how false expectations and ignorance flavour the lives of LGBT people living in Japan. A well-meaning wife suggests her husband not be so understanding to save one of the leads from falling in love with him. Parents who purportedly accept their son, still ask what kind of girl it would take to sway their child. Misconceptions abound in this easy, friendly and interesting series.

Just don’t go into it with an empty stomach. The details depicted in the cooking scenes made my recent pre-surgery fasting a total nightmare (don’t worry, I’m fine). I immediately set some recipes aside to try as soon as I could. Most constitute fairly simple Japanese dishes, and I challenge anyone to read it and not be inspired.

The representation of ignorance within the series offers a double-edged sword; on one hand we see how the realities of life as a gay man in Japan differ from societal expectations, but on the other hand it feels jarring when stereotypes are used within the context of the story. They might not be particularly flamboyant, but both men are fixated on their physical appearance- and the one that is less bothered is a hair dresser.

The 43 year old lawyer, Shiro Kakei has a beauty that defies his age and his appearance and demeanour often irritate his female co-worker. He finds joy in straight-forward legal cases and the preparation of a simple but elegant series of dishes each evening. His boyfriend, Kenji Yabuki is a colourful soul who appreciates his partner’s cooking, but is prone to jealousy and feelings of neglect. They represent a normal couple, navigating normal differences and each have a history that reflects the different ways people come to terms with their own sexual identities.

It’s an easy, delicious read with fun characters and a crisp visual style that will whet the appetite for each new volume. It’s currently being published in English by Vertical, Inc. while the series is still ongoing in Japan. 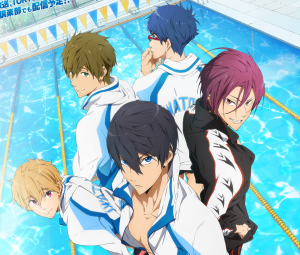 From lovely men to muscle-bound boys, we see plenty of fan-service in the anime series, Free! – Iwatobi Swim Club.

Free! is a fairly standard sports anime, with training montages, emotional competitions, heartache and glory, all the time reminding us that the true victory is within the friendships we make. Where Free! shines is in its characters. They represent fairly standard anime archetypes – the stoic one, the cute one, the dorky one, etc., but in offering an optimistic, joyful cast, we can better appreciate why their friendships really matter.

Gou, the club’s manager, and sister to Rin, the club’s old friend, and now rival, acts as our eyes into the objectification of these muscly lads. Her eyes (and ours) routinely sparkle at the prospect of another slow-motion dip in the pool.

The water itself feels like a character and shows the liberty and occasional threat reflected in the pun title. “Free” is short-hand for “free-style stroke”, while also representing the freedom offered by the swim club. It also helps that the animation is stunning, especially when capturing the dynamic of man merging with water.

Free! doesn’t tread any new ground. If you’ve seen any sports anime, you know what to expect. What you can expect is a set of great characters that are a blast to hang out with. The first season consists of 12 episodes and the second season, entitled Eternal Summer will air this July, 2014.

I hope you go out and enjoy a dose of lovely men, and when you’ve finished watching Free!, you can check out the hilarious recut and redub, called 50% Off. Often off-colour. Always gold.

Be warned: In no time at all, you’ll be forking out for these glorious figures by Alter. I know I did! 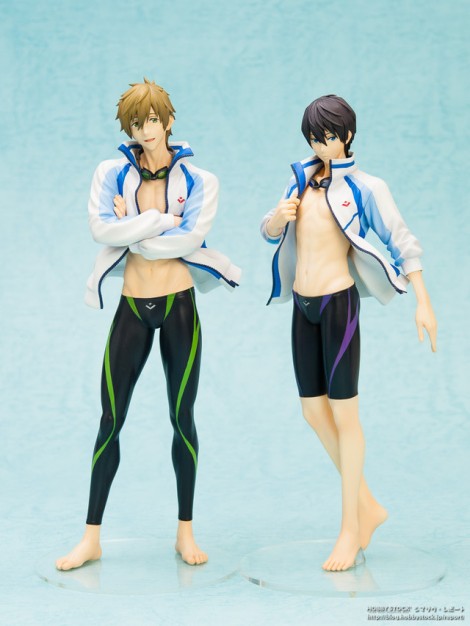 3 responses to “A tasting platter of lovely men.”