If you’re familiar with the fantasy gaming genre, you should be familiar with the concept of a dungeon crawl or a dungeon delve. Many games are based on this concept, where a group of adventurers tackle a fiendish dungeon filled with traps and monsters in search of mountains of loot to re-enact a certain duck’s swimming form. Dungeon Heroes is an enjoyable entry into this genre that distils it into almost an abstract game, but without losing the feel of a dungeon delve. 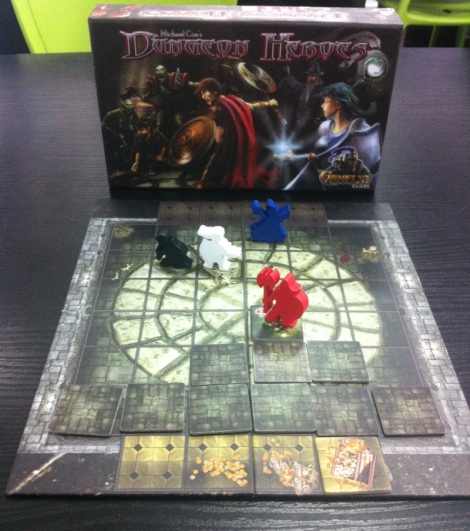 Dungeon Heroes from Gamelyn Games pits two players against each other, one playing the dungeon and one controlling the adventurers. The dungeon player spends turns laying randomly drawn tiles onto a board in the hopes of eventually killing all the heroes. All the while, the hero player moves the heroes around, flipping tiles in the hopes of obtaining 3 out of the 4 treasures hidden around the board.

On the dungeon player’s turn, he or she draws 4 tiles at random from a collection of tiles. Each tile must then be placed face down on the board. The tiles consist of various traps and monsters that will deal damage to the heroes if they step onto and uncover those tiles, as well as powerful artifacts and fabulous treasure. One of the treasure tiles is already face up and located at the end of the room across from the heroes. Thus, the dungeon player will usually try to set traps in the way of that treasure and obscure the location of the other treasure tiles. Once the tiles run out, the dungeon player goes into the aggressive phase and must either reveal hidden tiles or move any active monsters. Monsters are spawned from revealed monster tiles, and can then be controlled by the dungeon player to harass and hunt the heroes.

On the other hand, the hero player controls 4 heroes, each with a different classic fantasy class: A warrior, a rogue, a priest and a wizard. Each hero has a different amount of maximum health, movement direction and unique special powers. The wizard has arguably the most important power, which is the ability to reveal a tile without activating it, but also has the least health. The priest is able to heal other heroes, while the warrior and rogue can negate and remove monster and trap tiles respectively. The hero player can take 4 actions, which can be divided among the 4 heroes with each hero taking a maximum of 2 actions a turn.

The game is fairly simple, but it is quite fun to play. As the dungeon player, you need to carefully place your tiles to maximise your chances of killing the heroes. I found it actually more difficult as the dungeon player, as you couldn’t directly influence the hero player until all the tiles were placed. However, the threat of a speedy death can buy you enough time to set up your monsters for the second phase. You can adapt your dungeon layout to deal with the hero player’s moves but it’s still dependent on the random tile draw. I find it’s also a priority to take out the Wizard early, to stop the hero player from getting valuable information and reducing their risk.

As the hero player, you have to carefully weigh your risk and use your powers judiciously to pick your way through to 3 treasures. If you play it too safe and take too long, the dungeon player will have more options to menace you with monsters in the second phase. In this respect, in reminds me a lot of playing Netrunner. In Netrunner, you want to build up enough resources to execute safe runs as the runner but every turn that you take preparing is one that let’s the Corp increase their defences or advance their agendas. In both games, you have to carefully weigh your risks and make calculated moves to gain the advantage.

The art and production of the game is pretty good, although it suffers from having a very generic name, theme and art style. I really like the shaped wooden pieces for the heroes and the monsters. It’s also limited by being a two-player game and it’s not the easiest game to find in stock at shops either. It’s a shame because it’s actually quite a good game that deserves more of a chance. I give it 3 out of 5 Poisonous Clouds for the quick gameplay and bluffing/deduction aspects. If you do come across it and can find a spot in your gaming repertoire for a quick two-player asymmetrical game, it’s really worth a try.