Or a better title might be: Why Don’t You Love What I Love?

Today was decidedly uncomfortable. I had a good time with my wife and child, playing and cooking and watching mindless television (Happy Endings, if you must know). I even managed to fit in a jog with my neighbour. But I could tell both my wife and I were a little shaken. And the reason brings me to a fact that causes me great shame.

There. I said it. I feel embarrassed to call myself a graphic novel fan in the knowledge that I only lately read this important work. I was in a public library and the tiny paperback volume was wedged between some glorious hardcover volumes. I could have easily missed it. I could still be walking blind, groping in the dark, if it weren’t for the Echuca Public Library. My life is richer. I now own several editions of Ghost World, and have started catching up on Clowes’ works (The Death Ray and Wilson so far). What does that have to do with Kat and I? Everything. You see, I adore Ghost World. And Kat hates it. 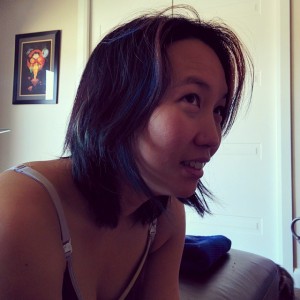 Kat’s “what did I just read?” face

“I had to take a very long sunshiny walk to get that horrible book out of my head. Kindly never mention it again.” she posted on social media this morning. She hated it THAT much. I tried to pry her for some recognition of its importance or artistic integrity.

“…But imagine the experience is condensed into a painting. Appraise this painting for me. You might not like the subject matter, but how did you find the strokes? The use of space? Did it speak to you in any way?”

“I hated it. I have patients like that. Repulsive people who just want to spit venom at the world. I didn’t like it.”

“But what about the moments of vulnerability amidst the bleak depiction of our sorry social state? Enid’s return to her yard sale, looking for the toy? How did the characters feel? The book was ugly, right? But it was ugly, like us.”

I’m in love with the banality, the characters, the social power-struggles, the fear and over-compensation, the ugly-beautiful artwork and especially the distinct lack of a need for a likeable lead character. These aren’t jerks we’re supposed to root for. This is like looking in on the guy down the street you never much cared for, or the loud racist at the coffee shop, or the neighbour who never returns your greeting. Their story can be told and it can be of worth, without any of these people being anything but their ugly selves. But I don’t need to sing praise of Ghost World – plenty have gone before me on that front. The problem is that this person I adore didn’t share my love. I’m used to the fact that Kat will probably never play the greatest game of all time. I understand that she loves all forms of fitness, except the one that I like (running). I even don’t mind that she likes to reduce the amount of sugar in all her baking. But the fact that she didn’t like Ghost World didn’t sit right.

I didn’t press her after our 2 minute discussion, but I could tell she was also feeling down about the fact that I liked the book. We have different tastes, but broadly speaking we like similar things. We like similar food, similar television and we share the same favourite anime series. It can feel disheartening when someone else looks at a beloved creation and they fail to see its true worth. I know this. I bait Adam with it all the time. Whenever he mentions something wonderful he’s been into lately, my response without fail is, “I’ve heard a rumour that it’s terrible.” I’m always happy to indoctrinate new followers into the world of Madoka/Mother3/Ouran/BioShock, and I do hit a wall on occasion. I’m an apologist for some of the most exciting, and disrespected media of our time. I’m an insufferable otaku (nerdy enthusiast).

I’m sure there’s a deep irony in the superficiality of owning several copies of this book, given the themes

I love all foods and I get offended when someone doesn’t like a food that I love. It’s an awful situation where if you ever mention that you don’t like a particular food, some small part of me dies. Why can’t you feel the joy I feel?!

My wife and I share similar world views. We want good for the world. We want to fight the injustice we see that’s so ingrained in our culture. We love creating and socialising and Jesus. We play games together. We read many of the same books, and we’re pretty good at estimating each other’s taste in movies. So why is this such an issue?

Because deep down I’m a man-baby. I’m an entitled nerd who thinks everyone should think the way I think. I don’t have an opinion unless it’s the right one. I spend so many of my waking hours dissecting works of art and explaining why people should love them, that I didn’t take time to consider that Kat’s gift to me was the time investment of reading this book. I bolted through it in 45 minutes, then did the same thing several days later when I knew I had to revisit it. Kat reads at more than twice my pace, and it took her hours to finish Ghost World. It was an uncomfortable read for her. And in the end, she didn’t like it. And that’s okay.