Here at The Action Points Podcast, we love Mother 3. It remains the pinnacle of achievement in (J)RPG’s. Or any genre, for that matter. And I’m not one to exaggerate.

Perhaps I meant to say that I love Mother 3. The rest of the crew are yet to fully comprehend its importance. As such, I, Evan Ritchie, must educate these heathens. We’re going to be playing through Mother 3, stopping to collect our collective thoughts at the end of Chapters 1, 2, 3, 4, 5, 7 and 8. We’d love you to join us for this life-changing ride.

Or, you know, just miss out on the greatest adventure of all time.

I often return to the Mother series, brain child of essayist, Shigesato Itoi. Mother 2 has been the only game of the trio to be released in the west, under the name, EarthBound, for the SNES. It was recently re-released on the WiiU Virtual Console. Mother was translated, but never released for the NES after several blockbuster RPG’s hit American shores and Nintendo of America was concerned that Mother wouldn’t match up to the flashy graphics of its peers. Mother 3 was originally in late stage development for the Nintendo64, but ran into issues of technical limitation. The solution? Return to the 2D, top-down perspective of the first two titles. Mother 3 was released for the GBA in 2006 to critical acclaim, but never made it outside of Japan. As a dark tale of capitalist greed and childish cruelty, not to mention pan-gendered eternal beings masquerading as drag queens and the ever lovable, armless tribe of Mr. Saturns (you may recognise them from Super Smash Bros., along with Ness, the hero from Mother 2), perhaps it’s entirely understandable why this game was overlooked for a global release. I’d argue that this game is what we desperately need right now (Virtual Console, I’m looking at you).

Mother 3 (along with the other titles in the series) demonstrates the kind of experience you get when you remove a game developer from the helm and put a philosopher in charge. Are games art? This question was answered with Charles M. Schulz dialogue, a turn-based battle system and an improbably good soundtrack with the release of Mother 2. Mother 3 merely tightened up the experience. Gone is the parody of the United States (Eagleland, anyone?) we saw in Mother 2/EarthBound. Mother 3 lands us on an outcrop of islands, watching the plight of kind, but simple villagers as they find their socialist paradise slipping away. An army dressed in porcine garb is messing with the local fauna in order to make the animals “Tougher! Rougher! Badder!” 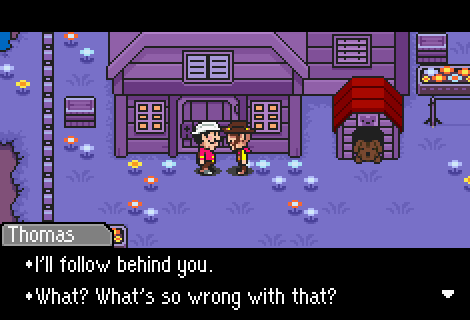 For a game with an unconventional tale to tell, Mother 3 has fairly standard turn-based RPG sensibilities. It has an inventory, a party system, multiple attacks and power-ups, and XP-based levelling. Where EarthBound was a challenging game, Mother 3 chooses to be a more comfortable experience, requiring almost no level grinding to reach the credits. Enemies move around the environment and will only engage in battle on contact. A rhythm-based attack system attempts to make things slightly more interesting, but if you’ve played any SNES era RPG’s, you’ll know what’s on offer.

Mother 3 pulls no punches with its heartrending depiction of naive wonder. A beautiful family, so in love that it hurts, is violently torn apart. They act as our microcosm, as the macrocosm of society at large is torn asunder. Where kindness was once the currency, and the local jail had never been used, we soon see Nowhere Islands slip into a mess of money and “progress”. Hammy messages are undercut with subversive, trope-defying occurrences, as we watch the beauty of childlike innocence corrupted by its counterweight: Childish selfishness. You will never see such tiny sprites imbued with so much character.

Before I get lost in a spiral of praise for the game, I’d like to address an important issue: In order for Mother 3 to be played in English, a crack team of translators worked tirelessly to bring us one of the most incredible translation projects since the King James Bible. Their work has been documented at mother3.fobby.net and the translation notes are well worth a browse. This isn’t amateur fan translation. This is a translation done by professionals working on a labour of love, free of charge. The head translator, Mato has even offered to give the translation to Nintendo for free if it’ll help the game see an English release.

If you’d like to join in with us, follow the instructions on the Fan Translation site, and very soon you’ll be caught up in the joy and sadness and love. Mother 3 is “Strange, Funny and Heartrending”

9 responses to “Welcome to the World of Mother 3”