Phantom Breaker is a fighting game series that has been difficult for fans outside of Japan to get a hold of, but thanks to the Steam release of Phantom Breaker: Battle Grounds, at least we have access to its beat ’em up spin-off. Where Phantom Breaker (2011 – released in Japan only, exclusively for consoles) and Phantom Breaker Extra (2013 – also Japan only, but this time region free, so thankfully importable) are 2D fighting games with HD sprite artwork in the vein of the Guilty Gear series, Battle Grounds offers the chance to take to the streets of Japan as chibi-fied, pixel art versions of 4 central characters with a fighting style more closely linked to its fighting game origins. The title was originally released for Xbox Live Arcade in early 2013, then for PS Vita in the middle of 2014. It has arrived on Steam, boasting a substantially meaty brawler with a distinctive art style. 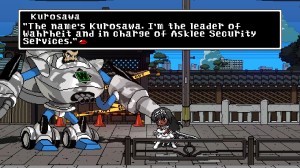 Phantom Breaker: Battle Grounds has several shortcomings that keep it from being a perfect experience, and your enjoyment of the title may hinge on these issues. So let’s begin with some potential problems, just to get them out of the way.

This game is easy. Maybe not by the standard of many games, but certainly by beat ’em up standards, and most definitely by fighting game standards. Normal is the highest difficulty level available to players until they’ve completed Story Mode. Despite boasting a full roster of moves and combos, it’s relatively simple to pick a single attack to spam for almost the entire game, only switching to a slow-charging area attack to break oneself out of any sticky situation.

Battle Grounds is not a long game. It only takes a few hours to complete the main story, but hopefully you’ll stick around for the co-op, local battle mode and challenges. Compared with other brawlers like Castle Crashers, and Scott Pilgrim vs. The World: The Game, the length seems paltry, but in the context of old-school, arcade beat ’em ups, it’s par for the course. Unfortunately, there is only local co-op at the moment, but the publisher, Degica, is in talks with the developers to try and include online multiplayer in the future, along with the DLC character, Kurisu Makise, from Steins;Gate, another series from 5pd., which was available for previous versions of the game. 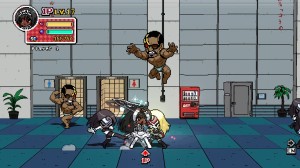 This is very much a Game with a captial G. It knows the history of its genre and doesn’t do much to rectify some of the more tiresome tropes. You will see the same enemy sprites over and over, you will hear the same screams and sound effects on repeat, you will find areas padded out with quantity over quality, and you can’t save mid-level. This last point is rectified in some way by the levelling system, but if you’re not a fan of some of these aspects of retro game design, you might want to look elsewhere.

If all that hasn’t scared you off, then prepare yourself for one of the best evolutions of a Double Dragon, or Final Fight-style showdown. Referencing its fighting game roots, Battle Grounds mixes button-mashing brawling with fighting game fundamentals. Players can block, crouching block, (weak, medium, or heavy) attack, dash, throw, guard break, outrage attack (area effect), slip shift (evade), and much more. It’s never overwhelming due to the reasonable difficulty curve, but it might require multiple visits to the commands menu. Battle Grounds‘ Story Mode doesn’t have a save system, but once levels have been unlocked, they’re accessible as a starting point with any character of any skill level. Having characters level up and learn abilities based on player-allocated skill points means that it’s somewhat dangerous to take a fresh character with you into a later stage. The Skill Set system of progression, the increased move set, and the various modes all help to set it apart from other games of the genre. 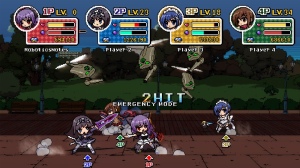 Extra players can jump into local multiplayer co-op at any point and it makes for some gloriously confusing, screen-filling battles, with support for up to four players. Multiplayer “Battleground mode” highlights the complexity and nuance of the fighting system with human opponents making for much more interesting combat. The boss fights, which pit you against characters with similar move sets capture some of this dynamic and offer a relief from the sheer numbers game played by the most of Phantom Breaker: Battle Grounds‘ foes. Ground-based, aerial and ranged opponents shift things up somewhat, but many new enemies are just HP-increased palette swaps of earlier baddies.

The combat flow and character control are as tight as I’ve ever seen in a beat ’em up. Everything is fast and fluid, and when enemy sprites aren’t blocking your vision, Battle Grounds feels fantastic to play. Phantom Breaker: Battle Grounds is a “two lane brawler”, so instead of moving fluidly around the combat area, players must press a button to shift between lanes of enemies. In that way, it’s more of a 2D fighter with multiple distinct planes to interact with. Having two rows offers some strategy when fighting enemies that cause area effects, or ones that have different levels of willingness to jump between rows.

There is minimal difference between the playable characters, but their designs are crisp and visually appealing. The striking graphics use low-res, 16-bit-inspired characters set in front of 3D backgrounds. These levels use flat colours and pixelated imagery to help them blend somewhat with the sprites. It’s this visual distinction that makes Battle Grounds such a joy to watch, and the character sprites positively pop, even with all the eye-candy and visual noise of the environments. The low-res character animation is paired with high-res environmental effects and distortion which further adds to its distinctive style. Having some knowledge of Japanese pop culture, or having visited some of the real world places included in the game makes examining these caricatures a hoot. I loved finding the recreated versions of actual stores, like Sofmap (called Mofmap in the game) and spotting an advertisement for a “Nintonko 4DS”. Likewise, the battle cries and spoken portions are in Japanese, so familiarity with basic Japanese aids the experience. 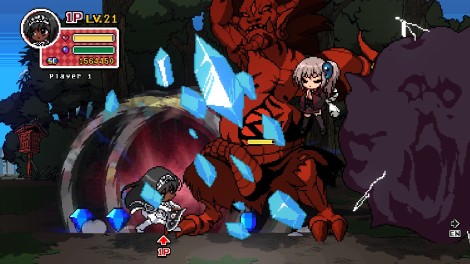 Getting a handle on the control system’s depth may take a few levels, but once you’re in the groove, Phantom Breaker: Battle Grounds is a solid brawler and an excellent addition to Steam’s growing list of couch multiplayer essentials. Pull up a few controllers and relive the best that retro, arcade brawlers have to offer, with just a few of the annoyances.