If you’re just here for some slides, they’re at the bottom. Hope you find them useful?

Let’s start things off with a crisis of identity:

Halfway through my talk, I realised I was indirectly referring to myself as Australian. I was very conscious of using the term “we” when I was talking about local board game designers.

Sure, I live in Melbourne. I will have lived here for over 10 years in July.

I still think of myself as Malaysian. I’ve mentioned before, and I think it’s still on my description in the “about” page linked up there, that I am proud to maintain my Malaysian accent. Although, recently I’ve begun to doubt if that accent is “Malaysian enough”. Okay, what does that even mean?

I’m proud to retain it because I’m proud of where I came from.

I love Melbourne. I love where I live. I love the markets near me. I love my local comic book shop and game shops. I love my friends and all the people I know here.

(Hey, since I love being pedantic too, until I formally get citizenship: I’m not!)

There’s a parallel to calling myself a board game designer. Pretty close to impostor syndrome, I guess. Although that Wikipedia article I just linked mentions “success” or “accomplishments”, and I’m pretty sure I have neither in the field of board game design. (Here we go again.)

But hey, you’re not here for my Crippling Self Doubt™, so let’s chop chop and get to some local board game design talk.

Here’s a little plug for the podcast: We spoke with Dan Golding, director of Freeplay on a recent episode.

I’ve been pretty excited to get more stuff done in the area of board game design and highlighting what’s going on here in Melbourne and in Australia. When I heard Freeplay was coming up and they were inviting content for their Sunday morning unconference-style session, I submitted a suggestion for a talk. Here’s what I wrote:

“Australian Board Game Design in the Modern Age. I’d like to encourage designers to check out the local board game design scene, and cover interesting developments in recent years including the impact of Kickstarter and online communities linking up designers and players.”

I decided to center the talk on what we had been covering on the podcast. We’ve had a lot of conversations amongst ourselves as Kickstarter backers and with people who had launched projects. I’ve also been involved with the Tabletop Game Design Australia group and the Games Laboratory Incubator group and have connected with a great bunch of very nice game designers. I wanted to let more people know about what’s been going on, and hopefully encourage them to check it out for themselves.

You can find the slides I used in my presentation at the end of this post. You can skip there if you like, but I’m going to ramble on a bit on what I presented and provide a bunch of links for stuff in the presentation.

I knew Freeplay has primarily attracted the digital game crowd, but are also very open to game designers of any discipline or form. Nevertheless, I thought it would be best to still start with a brief overview of what I meant when I talked about modern board games. The first few slides in the presentation gives some context to the types of board games I was focusing on, and I was able to reference the Board Games Up Late event that had been organized by Freeplay on Friday. I also went into a little bit of the history of Australian board game design, inspired by the Freeplay 10 event that highlighted key games in the recent history of Australian independent games development. It was pretty eye-opening to see the history of what had come before during the Freeplay 10, and I wanted to do the same for Australian board games. I mainly referenced this Geeklist of Australian-designed games, but also found this interesting blog post on historical political games.

I also delved into the recent history of board games, and their surge in mainstream popularity to set the context for more recent board game designs. I wanted to highlight that there’s been lots of things going on leading up to the recent mainstream attention, and to emphasize the crucial role the internet has played in getting board games to more people. I focused on two key milestones for what I call the Modern Age of board games, which were The Settlers of Catan (popularizing German-style games to the English-speaking sphere) and BoardGameGeek (allowing people from all over the world to connect over games and serving as a visible signpost online that there were so many great games around). In the first draft of my presentation, I actually had a lot more on the topic of how the internet has enabled board games to gain popularity and went into some specific examples but that all got cut for brevity and to focus more on the Australian part of the presentation. My talk still went over the 20 minute suggested time, and I still feel a little bad for how long I rambled on.

Next, I went into the influence of Kickstarter and how it has lowered the barrier to entry for designers and publishers, which isn’t necessarily all good due to some quality issues but has been great in encouraging more diverse creators and resulting games that would not have seen print otherwise. I also wanted to emphasize the more open communication between backers and creators that could happen through the crowdfunding platform, allowing creators to respond to feedback and understanding the diversity of their audience. I feel like Kickstarter is still very North America-centric, but it does seem like American creators are getting more mindful of international backers.

One of the things that wasn’t central to my initial theme but I wanted to really stress on was the growing conversation on diversity and representation in board games. I mentioned the Bruno Faidutti blog post on Post-Colonial Catan that still resounds with me, and also this article by Luke Turpeinen on Across the Board Games on representation and theme. I’m also going to link here to a couple of other articles that also discuss themes and representation in board games. I also had a chat with Allen and Sye on the podcast about this topic.

I talked a bit about the intersection of board games and digital games, which was an interesting topic covered at a panel at PAX Australia 2014. This was the so-called robot horse, in the horse salesman at an automobile conference analogy.

I highlighted 6 games by Australian designers published in the last 2 years. Each game had a different path to getting published (traditional and Kickstarter) and play different roles in the ongoing career of their designers. The 6 games were: Relic Runners, Sushi Go!, Francis Drake, One Zero One, Hedron, and Rise to Power. I also specifically chose Hedron and Rise to Power as they were both finalists for the Freeplay awards, and I figured the Freeplay audience might be interested in knowing more about some of the finalists.

I also crunched some numbers on 22 successful tabletop game Kickstarter projects to provide a snapshot on what’s been getting funded. The main takeaway was that the Australian projects getting funded are small to medium games, with heavier games not yet making a good showing, aside from Francis Drake. You’ll notice on the image that Francis Drake wasn’t counted since it was launched by Eagle Games and didn’t turn up in my search for Australian games. I added a note for Francis Drake’s numbers on the slides but didn’t end up using it.

I talked about what’s been going on with local board game designers connecting at conventions and online. PAX Australia has been a great boon and catalyst for connecting game designers from various states, and it’s led to more engagement and discussion in the online groups. I talked a little bit about Boardgames Australia and how they had been supporting local board game design since at least 2008. I talked about board games at game jams, which I’ve recounted here on the site and there was also another one in Brisbane recently.

Here are some pictures from the latest Incubator event I was at: 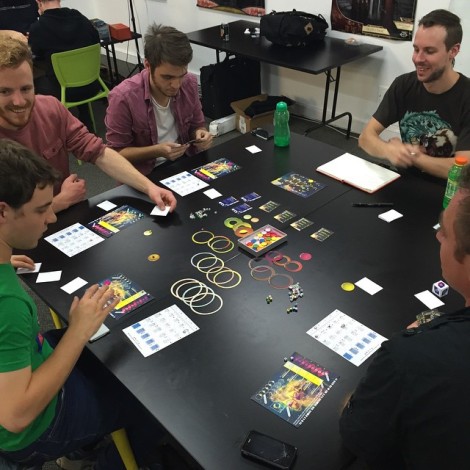 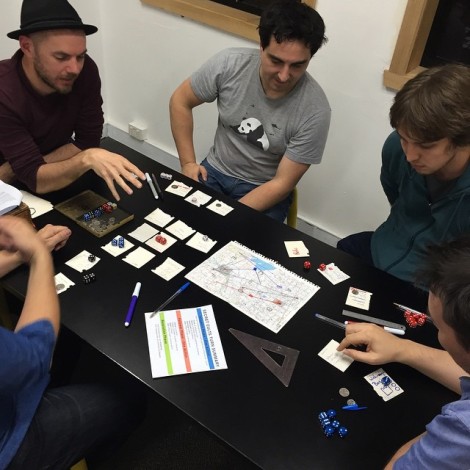 I went over some of my perceived challenges and opportunities for the local board game design scene. It’s growing and people are getting excited about it, so I’m more enthusiastic than cautious. Some of the challenges will be overcome as the community grows and people become more experienced with game design, publishing and marketing, and share the experience with others. Others, such as cultivating good playtest groups and encouraging diversity in creators and themes will probably need awareness and effort from the community to address. Since this was Freeplay, I ended by expressing my hope for more opportunities for game designers of various disciplines to get together and teach and learn from each other. The intersection with digital games has already been mentioned, but I am also intrigued by other media such as performative and pervasive games which was discussed at the Freeplay symposium and on one of the online sessions: Games With Invisible Buttons.

Look, again I’ve gone on for way too long. I hope whoever you are reading this and/or my presentation, you found it at least informative. I’m really excited for the future of the Australian board game design scene.  I really enjoyed my experience at the Freeplay festival this year and I’m hopeful to have more tabletop game related content at future events. Please do feel free to comment and let me know if I’ve missed out on highlighting any cool things happening in Australian board game design.

Here are the slides I used in my presentation:

3 responses to “Selling a Horse at an Automobile Conference: Talking Australian Board Game Design at Freeplay 2015”