This week we have a guest review! Many thanks to my wife Kat for penning her thoughts and for subjecting herself to a pleasant avalanche of feline cannon fodder.

In this adorable cat-filled touchscreen mystery, you play Nia, a little girl who is in her grandparents’ house for holiday season. However, grandparents are nowhere to be seen. Of course you then hide in the attic reading grandpa’s journal, while trying to defend yourself from ever-increasing waves of cats! You have to build a fort strategically, using pieces of furniture which you pick up from around the house.

I’m only a few hours in and so far I quite like it; it is somewhat hypnotic watching the cats fly and batter against my defences, and to scheme about how to do it better the next time. Nia introduces each wave of cats, occasionally telling you about the type of cat which is coming up (usually she warns you about the “fat cat”) as they may require a particular piece of furniture for defence.

There is no penalty for failure; the level simply resets to the furniture arrangement which you had established before the cats were unleashed. That’s usually a good thing, because sometimes all you need is to tweak it just a bit.

However, even when you successfully defend against a wave of cats, the furniture doesn’t clear away. You’re then left sitting in a pile of furniture, which you might want to clear away in order to rearrange it from the ground up for the next wave. Perhaps there should be a “remove all furniture” button somewhere, because so far I’ve been dragging each piece back to the selection bar one by one to remove them. It gets really crowded the further in you are.

Also, rearranging the furniture can be a bit of a pain, because when you touch a particular piece of furniture (say an armchair), it disappears from the scene, and everything on top of it proceeds to fall down as per the laws of physics. Then you have to move many pieces instead of just one. This can be annoying when all you wanted to do was to move it two millimetres to the right. 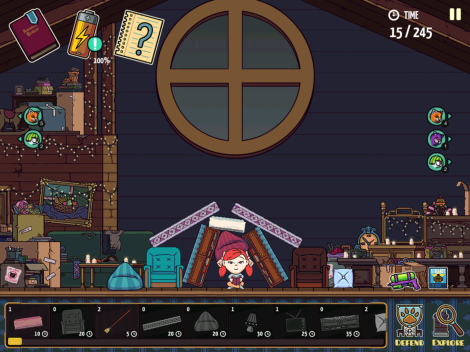 Your pieces of furniture each have a number assigned to them, which correspond to the time taken to set each piece in its position. Your time counter, at the top right hand corner, doesn’t do a countdown in real time (I initially thought that it would) but is whittled away according to what pieces of furniture you pick. Every round in which you successfully defend yourself earns you more time, along with occasional bonuses, like a new chapter in the journal, mystery packages, or information about new types of cat. 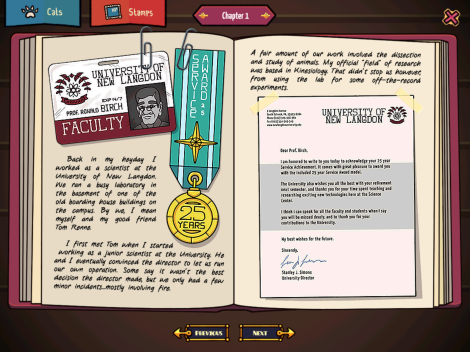 The journal entries are fun to read, and a story begins to unfold as you obtain more and more pages. It’s a strange story so far. 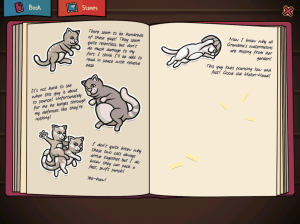 Did I mention the cute factor in this game? In case I didn’t, the cute factor is super high … It’s great! There’s even a watermelon cat whom I curse whenever he breaks through my barriers, but whom I can’t help thinking is cute anyway.

Conclusion: I am enjoying this game so far, although I wonder if it will get old soon. After all, the mainstay of the gameplay is the strategic building of the fort, and if one were to fail too many times at one particular level, one might be tempted to give up. Then again, the storyline may be compelling enough for one to want to keep going. I suppose I will see. In the meantime, pardon me while I go build a pillow fort IRL to keep my toddler and my cats from bothering me while I tap on my iPad.