Apologies for this horrendously late session report for June’s Incubator event. The June event was actually a bigger affair than usual, as it was held in the daytime on 20 June 2015, billed as “Incubator Day”. The idea for the change up was to allow for longer games to be playtested, as we would have more time, and also to reach out to more players to let them know about the board game design scene in their own backyard. This was a much more formal affair than the regular Incubator meetups, with flyers given out before the event, official sign ups, name tags, feedback forms and a raffle prize draw. 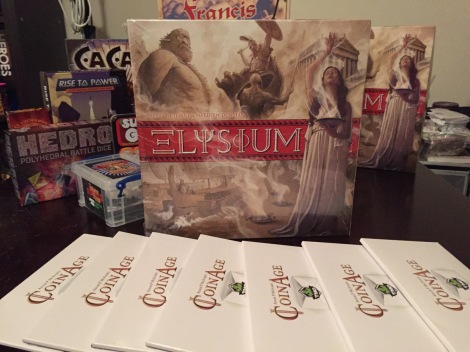 As one of the purposes of running the Incubator Day style event was to allow longer games time to shine, Stefan was the major driver behind the event and set up a sign up process to enable the longer games to be prioritised. At the regular events, we also encourage designers to inform everyone what game they would be bringing to build up interest and also allow groups to pre-organize and save time during the meetup. The formal sign up process was intended to encourage people to submit longer games, as well as use the game information on the promotional material. 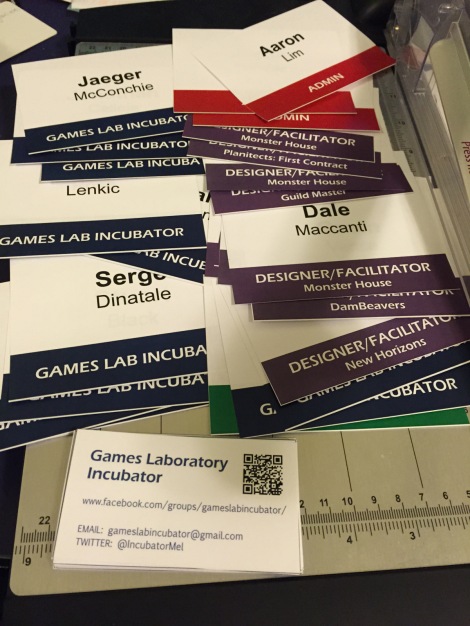 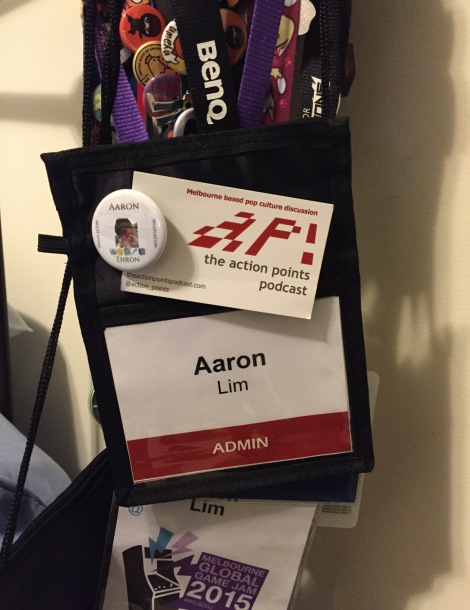 One of the other main purposes of the event was to build awareness of Incubator and local board game design efforts in general. The usual Incubator meetups are open to the public as well, and we have managed to pull in some curious Magic players to playtest before, but having a major event like this was a good opportunity to increase awareness and pull in new people who might not know about it. To that end, a poster image was created for sharing on social media, which was also printed as flyers and given out at some local board game meetups. I personally found the physical flyers quite effective, as I recognized quite a few people who turned up on the day who I had given flyers to. Due to the focus on attracting new playtesters, there were also suggestions and guidelines in the sign up to have good looking prototypes to appeal to the new playtesters. There was also a guideline that each game have 2 people prepared to run it, as it would allow the designer to spectate a playtest without having to run the playtest and also allow some rest between sessions. 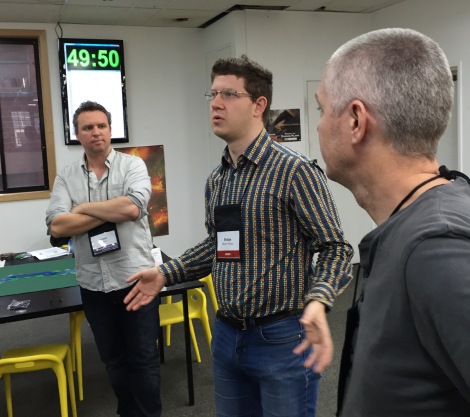 We also ran a raffle which was tied to the feedback forms filled out by the playtesters. At the bottom of each playtest feedback form was a tear-off section for playtesters to fill in their name and contact details to be entered into the draw. The more games playtested, the more entries would go into the draw. I think this went pretty well, although next time we’ll definitely set aside a proper box to collect the tear-off slips as we just used an empty plastic bag this time. We should also have clarified how the draw would be done earlier, as there was a bit of confusion with the order of the prize draws. Also, it may be worth putting a checkbox asking if playtesters would be interested in being added to a mailing list to be informed of future events. We had a separate feedback form for the event, which I think may have confused some people as there were 2 different feedback forms, so this is something that we will try to communicate better next time. We also some little contact cards that had the Incubator Facebook page link and email address on them, but those weren’t actually used. Overall, I think we were slightly better organized than the usual meetups, but we still have a ways to go to running a well-oiled event and group. 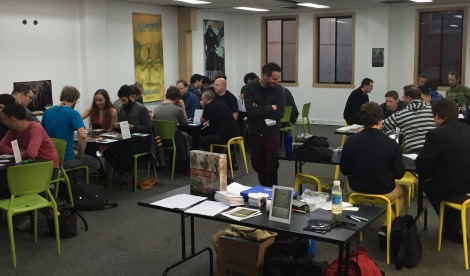 On to the games themselves. I didn’t get to personally play many of the games, as I took some time to chat with some attendees and help people get settled into playtests, but I did manage to playtest Guild Master. I had played an earlier version of Guild Master a couple of months beforehand, so it was nice to see how it progressed since then. The main thing I noticed was the re-balancing of the difficulties of the quests, which gave the game a better flow. It’s a simultaneous action programming game, where you assign your adventurers to various tasks that will bring glory to your guild such as completing quests, hiring more adventurers or hiring workers to expand your guild facilities. You start off being able to program 3 actions in a round, which are then all executed in order. If multiple players select the same quest the guild with lower fame (victory points) is more eager and gets the first shot at it, while the guild with higher fame gets the advantage when hiring workers and a separate blind bidding system is used for recruiting new adventurers.

There’s a really solid game at the core of Guild Master, though there are still some rough edges to polish out. As I mentioned, the quest balance has been improved from the earlier iteration but there are still many possible tweaks to be made to further improve the experience. The game we played went for about 2.5 hours with rules explanation, but never felt like it overstayed its welcome. It’s really up to the designer’s vision for the game, but I feel like it’s possible to squeeze the number of rounds and loosen up the economy a little to get it to the 90-120 minute mark which would widen its potential audience. The designers have also indicated that some of the graphic design issues we encountered (small icons and fonts on some of the cards) were already being dealt with in the next prototype. 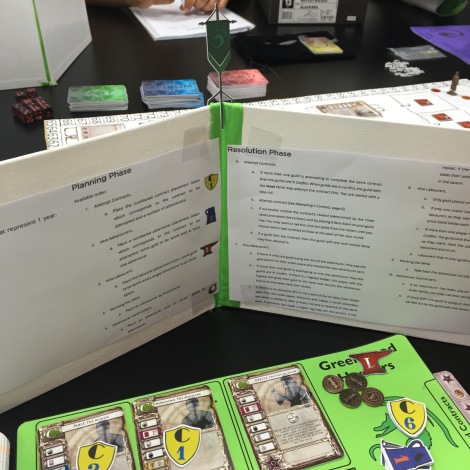 Other games that were being playtested included Sye Robertson’s New Horizons: 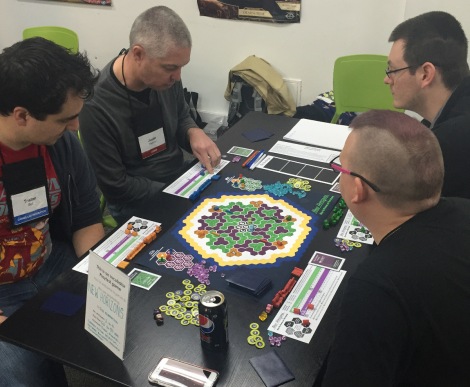 Sye also spoke previously about getting this game playtested on the Bordercon 2015 episode of the podcast. It’s a cute little take on a rondel combined with group action selection in games like Puerto Rico and Race for the Galaxy, or at least it was in the version that I saw being tested. It’s gone through a few different iterations as Sye has continued to refine its identity. 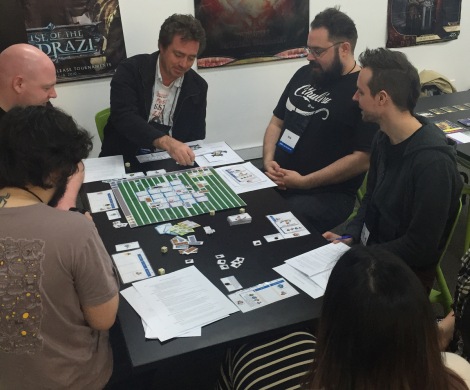 Didn’t get to play this one personally, but it was described as a co-op game against an antagonist player who could then turn some of the players to their side. It looked pretty fun. 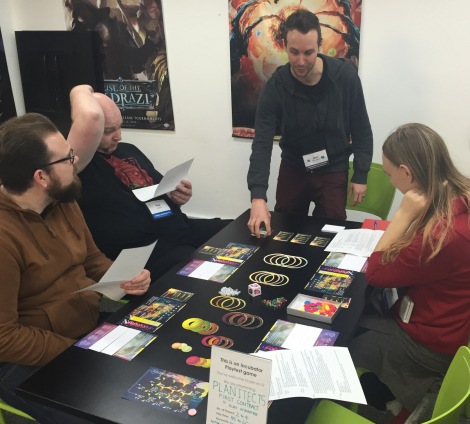 Also did not get to play this one, but it’s got really cool circular bits that represent the layers of the planet you’re building.

Dam Beavers by Gavin and Marcus 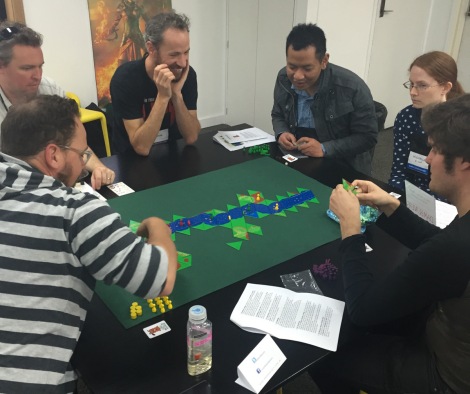 Another one I did not get to play personally (seeing a trend here?) but the components for this look really good. It’s about growing your family of beavers and managing your food supply through the river and dam tiles. 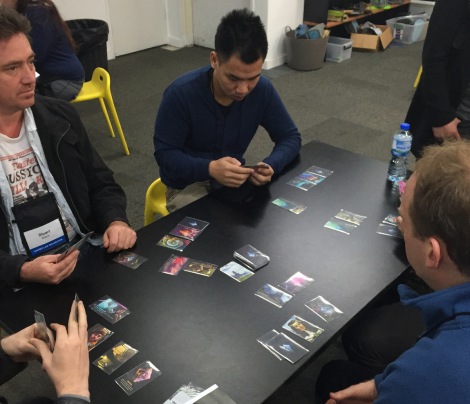 I also managed to break out my PnP copy of Entropy and even got a group to play Giant Snail Will Not Prevail, as there were more attendees than playtesting slots. One game actually had to pull out at the last minute due to an emergency, so we would have been fine with numbers otherwise. However, in the future I would try to have some backup plan in place if numbers do exceed expectations. I think having some other smaller prototypes mixed in would be a good idea too, to provide a change of pace and lessen game burnout for both the playtesters and the designers running the games. 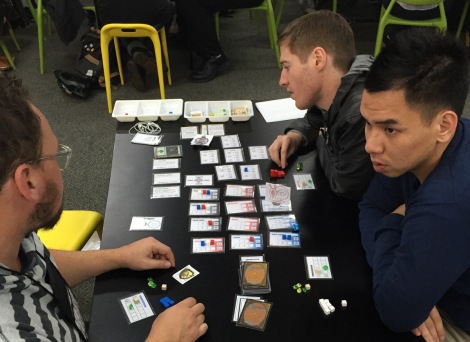 Overall, I think the event went quite well and people seemed to have a good time. There was some good feedback on the games as well as on the event, and we are hoping the make the next one even better. I’m really excited for the growth of the Melbourne board game development community, and I hope events like this will help raise awareness of what’s going on and provide a good opportunity for designers to interact with more board gamers and get feedback to improve their games. 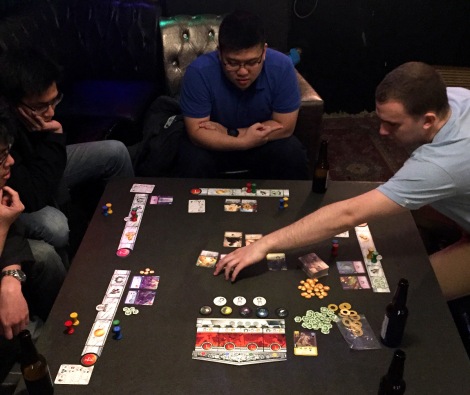 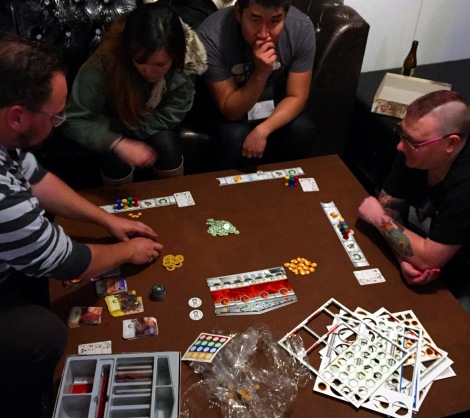 After the main event, we also got to play some published board games designed by Australians down at the bar. Elysium was the main prize of the raffle alongside copies of https://boardgamegeek.com/boardgame/146130/coin-age and some store credit vouchers, which got busted out at 2 tables. It’s a really great game and you can listen to an interview with one of the designers, Matt Dunstan, here. I also played Cacao, which is a light and neat mix of tile laying and worker placement. You can hear more about both Elysium and Cacao in our Bordercon 2015 podcast episode. Also, I finally got to get One Zero One to the table and I am so glad I did because it’s such a great little 2-player gem. The game is really easy to learn, but there’s a lot of tactical play in getting your cards to combo just right to claim the majority and the most points in 5 different rows. I think it’ll be my go-to 2-player quick game for a while, though I am also looking forward to David’s next 2-player game Matcha. 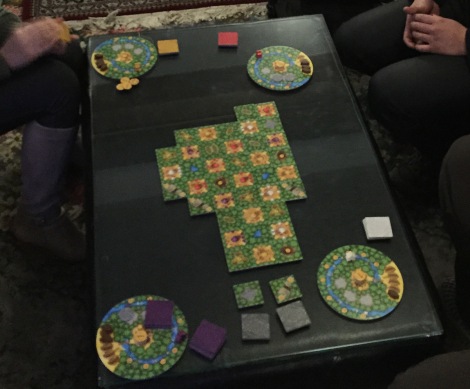 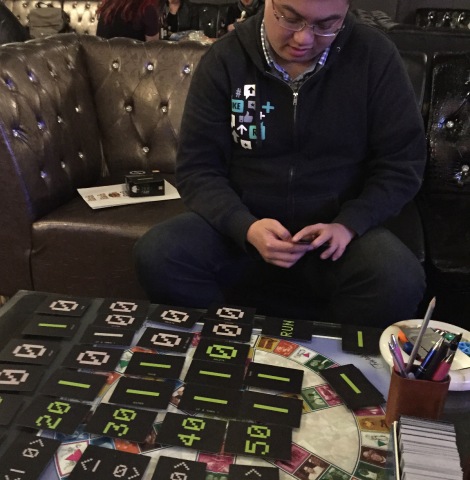