Initially, I wasn’t going to make it to September’s meetup as I would be/am still away in Sydney. Justin had other commitments as well, but Stefan was going to be okay to run it. However, at the last minute something came up for Stefan too and we were going to ask someone from the group to help admin it. Then, I had a fairly late change to a site visit that I had to return to Melbourne for and I ended up flying back on the Thursday night right before the event for the weekend. And that’s the completely boring story of how I almost didn’t make it to this meetup and we almost didn’t have anyone to admin it. Now to the juicy bits:

We had a bit of a slow start to the night, with just 5 of us. We did some brief introductions and shared a little bit about what we were working on. Since it was Isaac’s first time at the meetup, we started off with his prototype. Pickaxe is a pretty cool little set collection game where you build up a card engine to collect sets of ore and gems which you can also spend to improve your engine during the game. The game ending is player triggered and at the end of the game, you only score points for ore cards that are in your hand or your tableau, so there’s tension in investing cards from your hand to improve your potential versus banking on the points you already have and ending the game at the right time. I actually managed to get two plays of this prototype, with variations in the bidding system.

I really enjoyed this game and I think it has potential to be a fun mid-weight game. There are issues with it, especially with the powers of the workers and equipment which seem to be designed for a different style of game than the other systems are building. The bonus card for the winning bidder also seems a bit too strong, and I think there is a deeper system issue with how the card economy works with the scoring incentives. However, I think there is a skeleton there that is quite compelling. Like I mentioned before, there’s tension in sacrificing some value now for the potential of greater reward down the line. However, the current system makes the sacrifice fairly long term with the potential gain coming way down the line. Halfway through the game I did think it might flow better if it followed a more traditional deckbuilding model where the spent ore cycles back through your own deck rather than to the main deck. There’s still enough that’s different, since you’re more interested in crafting a hand for scoring at the end of the game and buying up permanent bonuses that never enter your deck. I’m pretty excited to follow this game along. 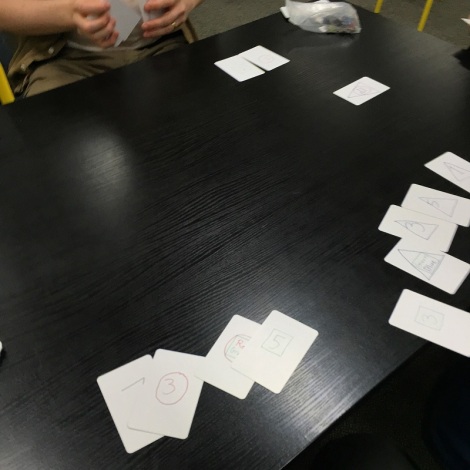 This was a really quick doublethink/Iocaine Powder game (I-think-you’ll-play-this-so-I’ll-play-this-but-you-know-I-know etc. etc.) where each player plays out bids to collect sets of point cards. The idea is that every player is a Venture Capitalist (title drop!) buying up a bunch of different interests. It plays really quickly but that element of doublethink, as each player has the same set of bids and you can always see what’s been bid, and the valuation of each point card changes depending on the set makes it pretty interesting. We actually managed to play 3 consecutive games of this, and tested a variation from feedback to lower the range of possibilities. With 4 players and a range of  5, it resulted in a lot more tied bids which were kinda cute rarities in the original setup but became tedious in the variation. The game is quite playable in its current incarnation, but I think it’s still missing a little spark of uniqueness that puts it over other fillers, which I guess is why it’s still being tested. Strong theme implementation (I’m reminded of how charmed I was by AdVenture Capitalist’s brazenness that kept me going with it) could also help in this regard. In any case, one to look out for. 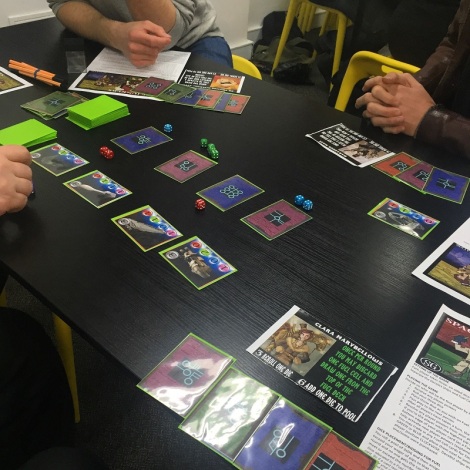 This is a re-theme of Codename: Indy that Al had at the last meetup. It’s a dice bidding game where you bid for different fuel cells that you then turn in for spaceship cards that gave you points until a certain threshold was met. You also get a character with different abilities depending on how many fuel cells you have. As Al himself warned us before the game, the cost and point ratios for the spaceships and the points threshold was pretty arbitrary and it did turn out to be slightly off. The spaceships came in denominations of 3, 4 and 5 points with a thresh0ld of 15 to end the game. This would require 3 – 5 spaceships to end the game, and since the 3 spaceship possibility was pretty low it became a race to see who could assemble the best 4 card score the quickest which meant you never wanted more than two 3-point spaceships if you could help it since the cost to get a 4-cost spaceship was not significantly higher. Balancing the numbers shouldn’t be too difficult to achieve, though.

The larger issue is in how the bid system works and how the character abilities are triggered. Right now there’s no real reason not to go all in on a single bid as you really do fall behind if you don’t win a bid every round, which reduces the tension and meaningful decisions in the bid. A few rules lead to this situation: the minimum bids are pretty easy to achieve until it’s almost arbitrary, there are only as many fuel cells available as players and no re-bidding or bumping down which means bidding low is really risky unless you’re the last player. In terms of the character abilities, they’re currently linked to the number of fuel cells you possess which leads to hoarding until the return from spending the fuel cells outweighs the utility of the ability. Coupled with no forced refresh on the spaceships and the low incentive for getting more low point spaceships, the buying spaceships face tended to grind to a halt until everyone had sort of built up.

I don’t mean to sound too down on the game, but I actually think Al brought it to Incubator at the perfect stage. It works as a game, and there is the potential for an enjoyable game there. The potential tweaks to the game are fairly obvious, depending on the overall direction Al wants to go with it and he has mentioned tweaks he’s hoping to implement, so it’s a matter of figuring out which paths are the best way forward for it and testing it more.

Sye is quite the prolific designer, with I think 4 projects being worked on concurrently. Robots & Rockets is due for release soon, and he’s been polishing up Just Chocolate and New Horizons at past Incubator events as well. This one, Prestige & Power, is a take on drafting. It’s actually quite reminiscent of the Masquerade card in Dominion, which I’ve always had a soft spot for. You have a hand of noble cards and you’re trying to collect sets of them to influence. Each turn one player calls out the number of cards that each player would pass and the direction, and this keeps going until someone else calls out “Huzzah!” to score the sets as they stand. The game ends once a player has influenced 5 nobles and you score bonuses for influencing nobles of allied houses. It’s a quick game with lots of shouting as you may be forced to break up sets that you wanted to keep together. One issue I’ve had so far is that there doesn’t seem to be a way for someone who’s behind to reasonably catch up as it is quite luck dependent, though we did end up testing a version where players who did not collect any sets at the end of the round got some compensation. I also think there should be some more ways to mitigate the luck or maybe have different set combinations to collect though I wouldn’t want to change the base formula too much as it is meant to be a filler. The card mix for different group sizes is also still being worked on, but I enjoyed this as a light game that offers a mechanic that isn’t used often.

Games I did not get to play:

Stuart is back with Goblin’s Lair and had a test of the 2-player setup.

Clinton has further simplified the 4-player version of Noble Intentions by removing the regiment powers.

This game has no title, which is the best kind of title (next to pun titles, obviously). Unfortunately I did not get a good idea of what it was about though I did hear monster terms getting thrown about. Also, it’s really nice to meet more new people at Incubator.

So that’s it for September’s Incubator meetup. It ended up being a really interesting one for me as I got to play a few games multiple times. I ended up playing Pickaxe twice, Venture Capital three times and Power & Prestige three times. It’s a very different experience when you get multiple plays in a playtesting session, and getting to see the effect of small changes being made to the prototype between plays. Obviously this is more likely with shorter games due to our regular time being a Friday night, which is one of the reasons why we also have the day sessions so longer games can also have a chance to go through the back-to-back sessions experience.

Also, I’d like to apologize to the newbies who came along later to this last meetup as I was sitting in on various games and did not do a great job as a host for you all. This is why it’s a great boon to have multiple admins, as one of us would be likely to be more available for hosting duties. However, our Incubator community has always been great with welcoming new people so while I do feel some responsibility, I can trust that the group will do their usual best with making newbies welcome.

If you are interested in board game design or in playtesting prototypes, come along and join us at Games Laboratory. We will be having a Saturday daytime session on October 24th, and there will be more details soon so keep an eye out on our Facebook group page. See you there!