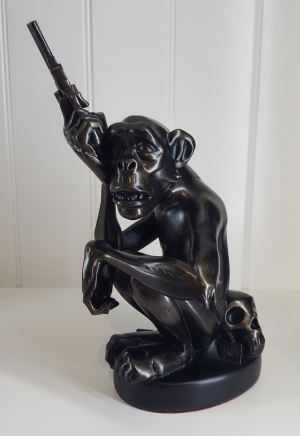 Mike Mignola’s faith and folklore inspired Hellboy universe has been populated by a diverse cast of creatures, and Mignola’s iconic sketch of a monkey holding a gun captures the fun and fantasy of the world. Appearing in Box Full of Evil, as well as a stand-alone sketch, the monkey with a gun has come to be a representation of Mignola’s style. Bigshot Toyworks have selected this particular design for production as part of their line of art toys.

Appropriately, this monkey is one of only 666 pieces produced, and the bronze edition (the statue is also available in bone) represents a stunning transition from Mignola’s distinct, contrast-heavy style to a three-dimensional figure. Bigshot’s application of faux-bronze paint looks stunning, particularly when illuminated to show off the sharp angles and melancholic expression. 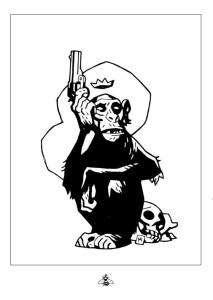 We may never know where that monkey got that gun, but as soon as I saw the prototype I knew I had to have him (her?). Mignola’s signature “M” and skull motif are included beside the monkey, and there’s a satisfying heft to the piece. As part of the collection of Mignola-inspired statues currently in circulation, this chimp stands out as a significant representation of an incredible body of work. Bigshot have done an amazing job.

“Monkey with a gun” is available in both colourways at $150US each from Bigshot’s online store. It stands 9.5 inches tall and is the best fake monkey around. If you’re interested in more Mignola statues, check out my “review” of Sideshow Collectibles’ Premium Format Hellboy Statue. Also worth checking out is Mondo’s upcoming statue inspired by Mignola’s first Hellboy concept sketch.

Click on any of the images to see the full-sized photos.