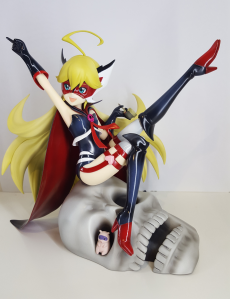 Yatterman Night (Yoru no Yatterman) is a wonderful new story in the Yatterman universe by Tatsunoko Productions. In the same style as the recent (and excellent) Gatchaman Crowds, Yatterman Night takes a classic Saturday morning style cartoon and reworks it for a modern audience. In this vision of the future, the descendants of the heroic Yatterman pair have created an oppressive, dictatorial nation and forced the descendants of Doronjo (the previous villain) into exile. This allows the idiosyncratic henchman, along with the ever-optimistic new heroine to take up the mantle of Doronjo and crew (Doronbow!) on a mission to deliver a flick to the forehead of those nasty Yatterman! 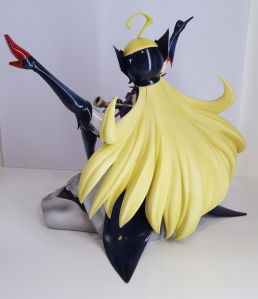 PLUM, who specialise in cute girl figures, have delivered an expressive pose on a really cool base. If Leopard’s (our herione’s name) gloves and boots look like they don’t fit so well, that’s because her uniform, based on the original cartoon’s design, is intended to evoke imagery of a young girl wearing her older relative’s clothes. This 9 year old might look a little strange in dominatrix-style villain attire, but it works really well within the narrative context. As a figure, it’s certainly very striking. This is thanks to some excellent texture work. 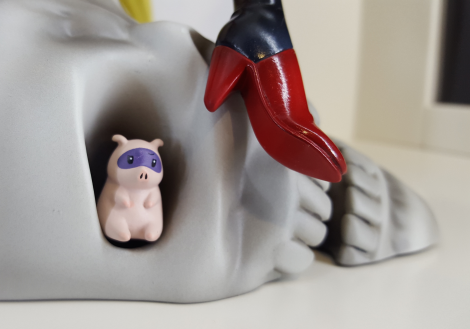 The shine on the faux-latex, and the matte bone texture of the skull look great. Oda-sama, the micro-pig (who they occasionally want to eat, but they must pay reverence to for reasons forgotten to the families) is included, but with no obvious place to put him, I settled on resting him in the socket of the skull base. The only complaints I could level at the figure concern the slightly lumpy paint job. Although the choice of colours and textures are great, blobs are occasionally visible when illuminated under bright LED lights. I originally intended to pair this figure with PLUM’s Kinomoto Sakura, as their poses are very similar. My plans were foiled when I realised that although she’s listed as a 1/7 scale figure, she’s drastically larger than Sakura. Her hair is enormous, and the tails on her cape manage to take up a lot of space in my cabinet. 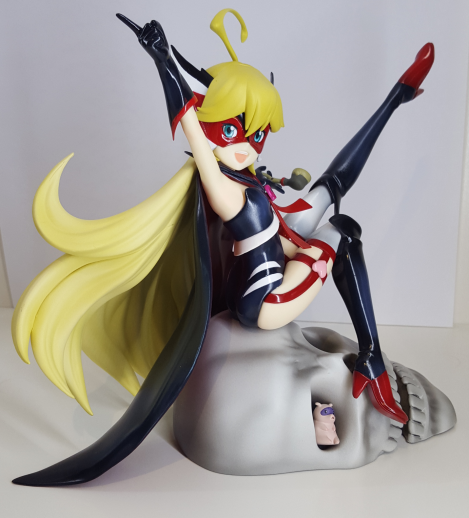 Click on any of the images to see the original photos. I look forward to comparing her with the Amakuni’s Doronjo figure, due early next year.

One response to “GEEKY SHIT: Doronjo (and Oda-sama) 1/7 scale figure by PLUM”