Journey was a new kind of “Game of the Year” for 2012. Media outlets were giving awards to a game that wasn’t filled with violence and gruff, white men. thatgamecompany had made their mark with atmospheric, somewhat experimental games like Flower, and now they were ready to deliver their magnum opus. Journey’s stunning visuals, gameplay full of symbolism, and a new kind of multiplayer system that offered more with substantially less, all contributed to mountains of accolades. All for a game about scaling a mountain.

PlayStation and ThinkGeek bring us a fitting tribute to this beautiful game in the form of an 11 inch tall Polystone statue. The unusual, but brilliant mechanic whereby players are connected with other players randomly over the levels, without the means to do much more that chirp and fly at each other created a new way to share a gaming experience. New players would find assistance and older players could spend their time showing newer players the locations of the hidden scarves that were scattered across the levels. This statue captures a meeting between a new player with a relatively short scarf, and a player who has earned their white robes by hunting down all the floating scarf pieces.

The texture of the sand is impressive, but I feel that it might have appreciated a little more variety in tone, like the stony surface of the alien architecture. Sturdy metal pins connect the red character to the base and the white character to the red, giving the illusion that the scene is floating effortlessly. The paint on the scarves isn’t as sharp or accurate as that of the base. The shading on the faces, and the shine and shadow offered just by the geometry creates a pleasant depth to the figure. As you can see, the angles of the scarves blowing in the wind make for lively, yet somehow incredibly Zen imagery. 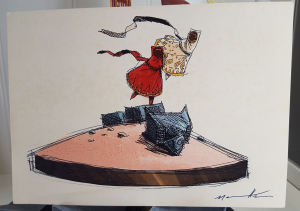 $150 seems like the ideal price point, given the size and detail of the statue, but those of us looking to purchase it outside the US had to go by means of a proxy service, as this collectible shipped solely within the US, was limited to 1000 pieces, and sold out very quickly. Included with the statue is a postcard depicting the original concept art by Journey Art Director, Matt Nava.

The Journey statue makes for a striking addition to any video game statue collection by virtue of its tranquillity, sense of weightlessness, and distinct desert tribe aesthetic. Finding it on the after-market might be a little tricky. It’s a calming and joyful addition to my collection, and I’m glad I snagged it when I did.

Click on any of the images to see them at full size. 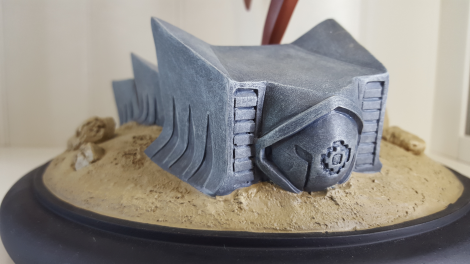 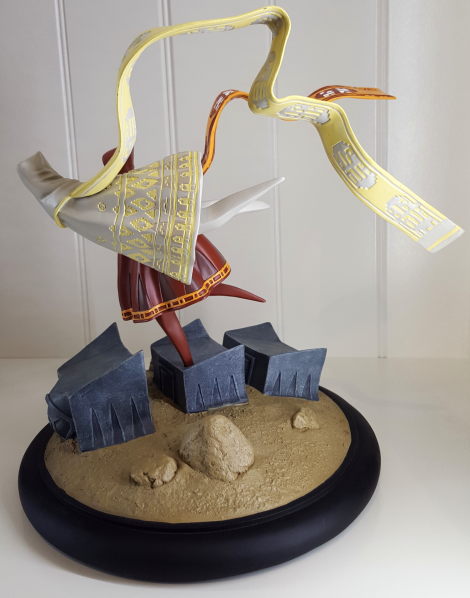