The third movie in the Evangelion re-re-(re-)boot, Neon Genesis Evangelion 3.0: You Can (Not) Redo, might be the least popular film in the latest incarnation, but it has given us some wonderful figures. After the 1/7 scale figure by Alter, I thought I’d found the best Asuka available. With both figures hitting release in quick succession, I took a risk and ordered one of each just to make sure I’d made the best choice… by making ALL THE CHOICES. And I’m so glad I did. They are both fantastic. The detail and attitude really sold me on Alter’s, but it turns out that when it comes to Asuka, bigger can be better. 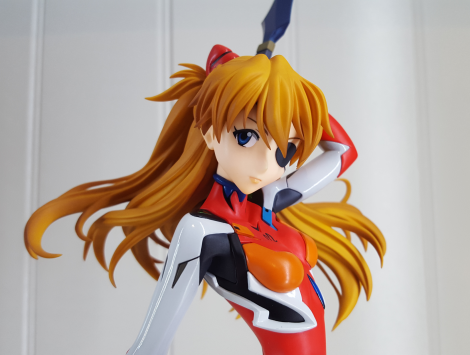 At a pleasant 1/6 scale, wielding her stunningly tall weapon, Asuka comes in at around 15 inches (38cm) and is just too tall for a standard IKEA Detolf shelf. The detail and expression on her face, with the extra colour, tone and dynamic shape of her hair, make her perhaps even more appealing than her 1/7 scale Alter twin. She is my first figure by Amakuni, and she’s positively flawless. I had a little trouble inserting her weapon through the swirling locks of hair, but it was well worth the effort.

Rei is usually everyone’s favourite, and I hope that Amakuni and/or Alter continue producing figures from the film series so we can have the ultimate pair. The obvious criticism to be made is the lack of imagination the sculptors had when designing these figures. For all the detail and accuracy, it’s a shame both rely on the impossible twist and tilted heel that are designed to show off the posterior AND face. Although both are assets are lovingly sculpted, it does make this item unnecessarily pervy. Of course the designs of the plug suits are clearly intended to accentuate this, but these powerful stances lose a little of their power when the design is so blatant.

The shine on the legs of Alter’s plug suit isn’t present on Amakuni’s, instead showing off a well-shaded, matte purple lower half with shiny upper sections. I’m genuinely hard-pressed to find any fault with either figure in terms of production quality, so if you’re tossing up which figure you might prefer, it’s going to come down to which scale better suits your personal taste.

I’m usually a fan of 1/8 scale figures, but if Amakuni can produce larger scale figures as beautiful as Asuka here, my shelves might run out of space ever-so-slightly sooner. I feel like the images should really speak for themselves. Click on any of the pictures to view them at their original size. One response to “GEEKY SHIT: Shikinami Asuka Langley by Amakuni”