If you haven’t heard of Hatsune Miku (Miku-chan, Miku, or CV01), then you probably don’t go to enough geek conventions. She’s a “Vocaloid” – an avatar from a music synth software package and she has spun off into various other media, from rhythm games to live concerts. She’s the owner of that pair of teal-blue twintails (pigtails) you see EVERYWHERE. And her Nendoroid form (“super deformed” brand of action figures that usually come with multiple faces, outfits, and/or accessories) is one of the most iconic otaku collector items around. Every year there are multiple Miku Nendoroids released in every theme from Christmas, or cherry blossom, to Halloween stylings. She really is everywhere.

I’m not much of a collector when it comes to Nendoroids, for mostly practical reasons. I love the style, but with hundreds available, a complete set isn’t likely, and with so many poses/outfits possible, it can be confronting to decide on a best way to display them. I’m not really an action figure guy. I like highly detailed, pre-posed figures with show/manga-accurate details. In order to have a little something from this iconic and loveable style, I wanted to make sure I wasn’t selecting a character I was highly invested in when buying a Nendoroid. It sounds like strange reasoning, but hang in there.

As of today, Miku is the only “jumbo” Nendoroid ever created. She was initially only available as a ticket prize at certain retailers, as part of a lucky draw. In case you haven’t noticed, SHE’S MASSIVE. Properly large. Below you can see the regular Nendoroid for size comparison. She’s 30cm tall, and cute as a bug’s ear. The fact that this giant Nendoroid isn’t common, but is in fact an absolute icon makes her very appealing as part of my collection. She’s not impossible to find, but she’s certainly not on a lot of western collectors’ radars. Every time I post a photo of my figure collection, she’s the one people ask about. Let’s get to the figure. She’s a highly-detailed, large-size version of the Miku Nendoroid, apart from some key features (or lack thereof). She has no accessories, no alternate faces or poses, or any customisation options whatsoever. She’s stuck in her singing pose, and that’s the way she’ll stay. She seems most suited to shop displays, but she’d also be perfect as a centrepiece to a Nendoroid collection, acting as mother to all her chibi-children. Her stand is simple and consists of a neck support, and two arms that balance her twintails. The buttons on her sleave are bright and big and simple. She looks fantastic. Her colouring is great, and the shading is spot-on. It’s genuinely difficult to feel sad while looking at her bright eyes and tiny grin. If you’re a Miku fan, get her. If you’re a Nendoroid fan, get her. If you’re looking for an eye-catching central focus for your anime figure collection, get her. If you only want one Nendoroid, get her. If space is an issue, look elsewhere.

Click on any of the images to see the original high-res photo. 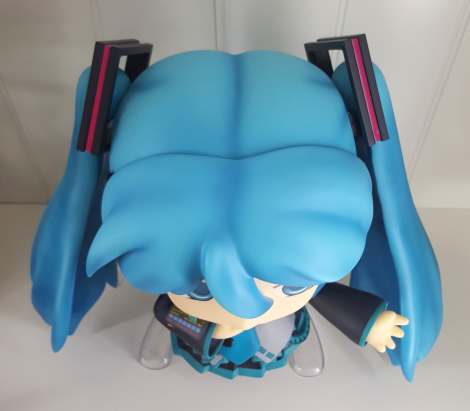