My house is something of a shrine to the Mother series of videogames. I have fan art, figures, plushies and various official and unofficial publications all dedicated to this disarmingly strange series. I’ve written a bunch of articles, including a brief history of the games, as well as about Mother 3 specifically, along with chapter discussions involving my podcast co-hosts. I routinely post pictures on social media of all my trinkets, because what’s the point if I can’t share these cool items with people? This particular collection always gets the most web traffic, and that’s because these once-inexpensive figures have for the most part made up the biggest set of official merchandise from the series. With shirts, jackets, planner covers, and phone straps available, there are now plenty of items to hunt down.

Click on any of the images to see the original high-res photo. 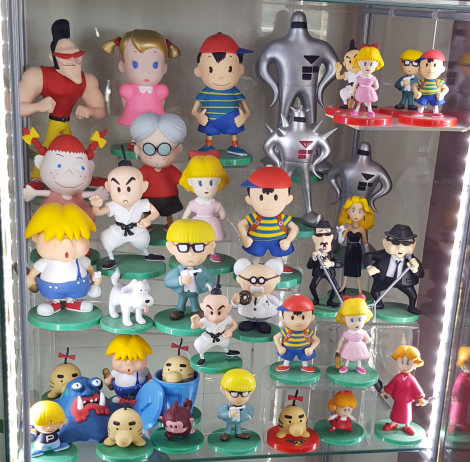 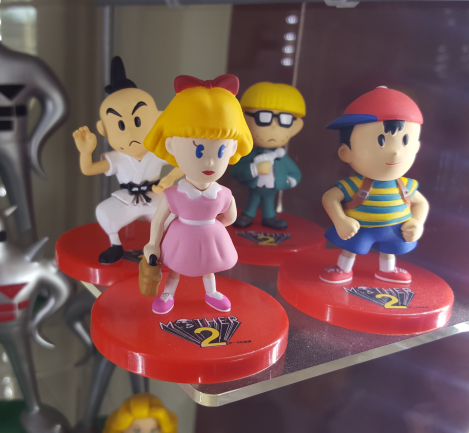 This particular collection of figures were released as crane catcher prizes in arcades across Japan, so hunting them down either involves a great amount of skill and a bunch of 100円 coins, or hitting up second hand retailers, like Mandarake, or Plamoya, or even Yahoo Auctions Japan if you’re happy to use a proxy service. The larger, green-based figures were released in Japanese arcades from 2010, 16 years after the release of EarthBound (Mother 2) and 21 years after the original Mother. Earlier this year, fans who wanted more EarthBound merch were treated to a re-release of sorts, when the original series of figures reappeared as gashapon (capsule toys) in miniature form. These have red bases, the Mother 2 logo, and slightly less detail than their larger counterparts. For only a few hundred yen, they’re a much more affordable option than tracking down the original series on the aftermarket.

The Mother and Mother 2 figure series were released as follows: 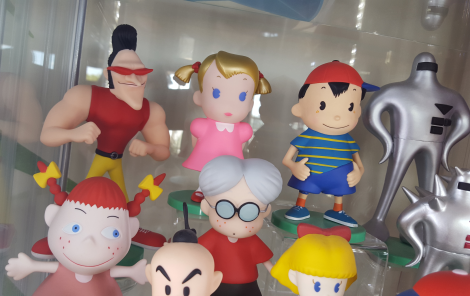 Along with phone straps and keychains, Banpresto have released various Mr. Saturn (Doseisan) themed items in the form of plushies and a large scale vinyl. The only plush toy missing from my collection is the giant Mr. Saturn, of which 500 were made. They stand half a metre tall, and regularly sell on eBay for hundreds of dollars.

To folks who are unfamiliar with the Mother games, this collection stands in contrast with the rest of my figures. They’re less detailed and considerably more cartoony. However, to people with an affection for the series, it often elicits squeals of delight.