I recently played a 3-player game of Microscope with my friends Jonathan and Steve. Microscope is a storytelling game where you explore the timeline of a nation, group or civilization by Ben Robbins. The game went from about 1:30 pm to about 4:15 pm.

We decided early on that we’d keep it to a seemingly standard high fantasy setting since it was our first time playing the game and learning the system. We decided to focus on the rise and decline of an ancient empire. Our start point was the establishment of the first university (making knowledge and learning a key theme) and ending with the fracture into different kingdoms and city states.

In the palette setting phase, we decided on YES to direct divine intervention, industrial revolution and undead. I will admit here that direct divine intervention was a bit of a selfish choice on my part as I was hoping to steal some ideas from this session to use in my regular D&D game. Steve wanted to see more than just sword and sorcery stuff and Jon added the undead because of one of our NOs which I’ll discuss in a bit.

We decided NO on “space travel”, artificial sentience, fixed good/evil alignments, and natural lifespans past 100s. “Space travel” and artificial sentience were banned to focus on the material world (no planescape situation and no warforged/golems). Fixed good/evil alignments (e.g. all orcs and zombies are evil) is something that has bugged all of us in typical fantasy so we got rid of it. This led to Jon adding undead as we wanted to have that “no fixed alignment” thing show up. The ban on long lifespans was in response to the undead thing and because I personally find it annoying. Jon really wanted to have “no singular rulers” as a ban, but I objected to it being too broad (I wanted to leave the option open). In the end we decided not to ban it outright but keep it as something we’d aim for at the start. In hindsight it probably would have been okay as a ban. If anyone else has played before, I’d love your feedback on it.

I like this portion of the game as it let us negotiate what we each wanted to play, and it’s interesting to see how much baggage we each bring to the table already with a pretty common theme.

We set the initial scene to include periods for the discovery of necromancy at the university, consolidation into an empire, and a grand library acquisition where the empire would build the biggest library in the world.

First focus was on the high council that set up the university. We set out that the university was established by a council of different disciplines who wrote the initial charter. This council was later expanded into a ruling cabinet to govern during the imperial phase. The council also were the first to discover necromancy by experimenting on themselves and causing a minor leadership crisis when they came back from the dead to haunt the charter after the new council was formed. In the end, the personhood and rights of undead were established and the tradition of a trial to be admitted into the ghost council haunting the charter was established. At this point, I realised we had basically made imperial Hogwarts.

Second focus was on appeasing the gods. We found out that the gods weren’t too happy with mortals messing around with necromancy which resulted in major conflict. One of the demands kicked off the Grand Library project as the gods set a labour to collect all the knowledge in the world or suffer their wrath. This backfired spectacularly as the mortals learned how to kill gods in their quest for knowledge and led to a period of war between mortals and gods. Also at this time, the College of Librarians was founded to send people out to gather knowledge, which led to them meeting various other races and cultures.

Final focus was on the end of the war with the gods. At great cost, the mortals built a machine that could do this and ended up killing the gods of life, death and harvest who were the most opposed to necromancy.This lead to at least a year where no new life or death happened in the empire, which actually spurred the industrial revolution to find ways to survive without the gods. At the end of it, some other entities re-filled the positions of those 3 gods, and new gods were also created – gods of the undead and of machinery. A truce was reached and a conclave was held to find out who these new gods were and what purpose they served. We played out a short scene at the conclave between Jarlemaine, incumbent god of the sun, the new machine god, and Nerissa, a lich high priest and representative of The Veil, god of the undead. At the end of the conclave, the purpose of the new gods were identified as progress and continuity. This unfortunately led to a new schism between the old and new gods, which changed the nature of the ongoing war. At the end of this war, the empire itself split into factions – between progress and tradition – and finally fractured into different kingdoms and states as we set out at the start. 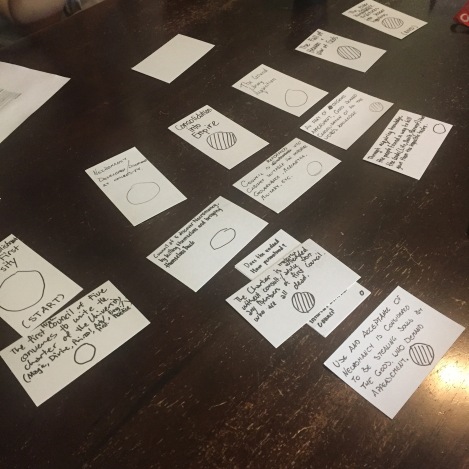 We had a slow start as we got used to the system and got to know what kind of setting we were building. I will admit that I found myself in GM-mode often (since this worldbuilding stuff is so part of that) and I probably overstepped my bounds too often. I realise this is a hindrance and I need to learn to step back more, as the input from Jon and Steve were always great and took it in places that I probably wouldn’t have gone. We were also a bit wary of the scenes at first, considering there were more rules to setting them up than the other types, but the one big scene we had with the conclave ended up being really cool and inspiring a lot of other details. I was also pleasantly surprised that we managed to nail all 3 themes that we set up at the start of the game. I was a bit worried that we would miss out on the industrial revolution stuff but we managed to incorporate it in the end.

Overall, I really, really enjoyed the game. As I mentioned above, it speaks to that worldbuilding aspect of GM-ing that I enjoy. I am already figuring out how I’m going to incorporate some of the details of this game into my D&D campaign, and I’m excited to use it as a first session collaborative wordlbuilding tool for a future RPG campaign. However even as a game itself, I would really love to play it again, now that I know roughly how it goes and use it to explore more interesting settings.

You can buy Microscope from the designer’s website here.