The Legend of Korra was a revelation in Western cartoons. After the intricate and beloved Avatar: The Last Airbender introduced us to the world of martial arts inspired elemental manipulation, The Legend of Korra showed us what progress looked like in a world powered my semi-magic. We saw a culturally diverse cast headed by a woman of colour and a parade of endearing characters, all with complex motivations and histories.

Thanks to Zwyer Industries we now have the first high-quality, large-scale figure from the series, and Republic City’s grumpy Chief of Police turned out to be an excellent premier character. Lin Beifong’s initial irritation at meeting Avatar Korra is one of the defining moments in Korra’s realisation that not everyone in this new age of technology is as on-board with the old ways of magic and mysticism. 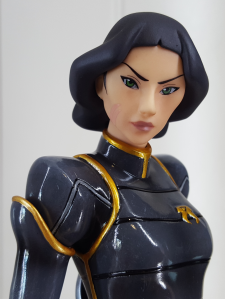 Zwyer has chosen to depict a younger Beifong, battle-ready, and standing on metal debris, which she is capable of manipulating at will. As daughter to Toph Beifong, the world’s first metalbender, Lin Beifong was destined for greatness. Her constant attempts to live up to her mother’s standards set her on a trajectory to becoming the hard-nosed chief we know and (eventually) love.

At 11 inches (approx. 1/7 scale), the level of detail in her hands and hair doesn’t quite match up with that of the best similarly sized anime figures, but the attention to detail on the clothes and base is suitably impressive. When compared with the promo shots, Chief Beifong look much nicer than her prototype. Her eyes and uniform are much more crisp and in-character than I initially feared.

Hopefully the line of figures continues, and we eventually get to see the entire main cast. It should be noted that this edition is the “Convention Exclusive” edition, and could only be purchased at conventions. The key differences with this figure are the glossy coat on her uniform (matte on the regular edition) and the gold colour of her name plate (silver, otherwise) when compared to the regular edition available through Zwyer’s online store. The regular edition is still available for $99.99US.

NEWS JUST IN: Avatar Korra is Zwyer Industries’ next figure! Until then, please enjoy these photos of the wonderful Chief of Police, Lin Beifong. Click on the images to see the full-sized photos. 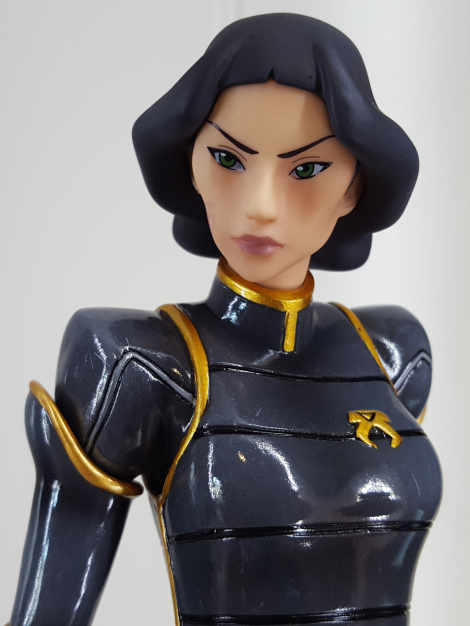