Welcome to another round of GEEKY SHIT, from your insufferable host, Evan! I just can’t stop talking about this rubbish! The first anime figure I ever owned was the Alter version of Hirasawa Yui, my favourite character from the slice-of-life moe-fest that is K-On!. During my travels in Japan, I hunted far and wide to source the last couple I was missing from the line-up, and now I’ve gotten the band back together, it’s time to get this show on the road!

I’ve managed to find a display cabinet that capably fits all the PVC girls on one shelf, with the help of a few plastic risers. I’ve previously mentioned that I am an Alter fanboy, and the attention to detail in these 1/8 scale figures is incredible. I won’t be doing an in-depth look at each figure, but I will instead provide just a little key information about each girl. K-On! is a slice-of-life anime that originated as a 4 panel comic strip. It follows the school lives of the music club, and its title is a concatenation of the Japanese word for light music (kei-ongaku). It’s cutesy, fun and relaxing, and has grown into a massive cultural phenomenon. It’s even had songs from the show reach high into the Japanese pop music charts.

I have to start with Hirasawa Yui. As I’ve mentioned on the podcast, Yui’s indefatigable spirit and penchant for laziness make her feel like something of a kindred spirit. She has a crazy knack for cramming knowledge and skills into her brain at the last minute (often at the expense of some other information). She’s enthusiastic and ultimately shameless. Alter did an amazing job with her face, and like all the figures in this set, there’s a great sense of motion to the figure. She’s leaping in the air, high on life. The fishing wire strings on her guitar are being pressed down by her fingers, and even her fingernails are visible on the figure. Like all the instruments, the paint work and tiny details are incredible to behold. It really looks like an actual instrument. Please excuse the dust on all my figures. I really do need to clean them. 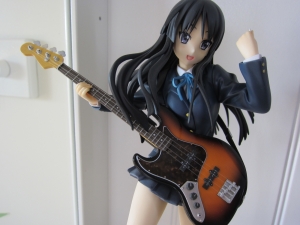 Akiyama Mio is the straight girl of the group. She laments the lack of focus displayed by the other girls, but her figure captures her joyful spirit as she feels the musical synergy of HKTT live on stage. Despite us being privy in the show, and even more so in the 4-koma, she isn’t wearing her shimapan. Her pose is probably the least interesting of the main 5, but she still looks great with her hair flowing around her (Eliza-)bass. She has been known to have her base pegs snap off inside her feet, due to the single, small fixture point, and I actually had to repair her using some super glue and a filed down piece of chopstick. Even in my cabinet she’s up the back avoiding the limelight. Mio’s just a little shy.

Kotobuki Tsumugi is rolling in the money. And she’s basically perfect. She’s kind, clever, and even takes time out to spend energy researching how the less fortunate live. Like Ouran’s Suoh Tamaki, she just wants to see how the lower classes make their way through the world. Mugi is often embarrassed by her family’s wealth, but the various holiday homes do come in handy when the band need a great band camp location. Her stand out physical features are her thick eyebrows. Yui dreams that they are in fact pickles and wants to eat them. Her figure is has probably the least appealing face, although it’s very accurate to the key artwork the figure is based on. It just doesn’t match her usual appearance nearly so well. However, this figure has easily the most detailed instrument to make up for it. Right down to the LCD display, USB symbols on the ports, switches, dials, and safety warnings, it’s impossibly detailed.

Poor Nakano Azusa. She just wants to practice, but the Ho-Kago Tea Time seem to spend all their time eating cakes and dressing up. Days will go past where they even forget why they’re in the music room. Azusa is the final member of the band, and the figure of the main five with multiple display options. As pictured, Azusa can wear her costume cat ears and go into full Azu-nyan mode. She can be confused with Mio, as she’s also less flighty than the others, and has long black hair. Thankfully her massive pigtails act as a constant reminder that she is in fact in the year level below the rest of the girls. Her mid-air power chord pose shows her at a time when she is just beginning to understand the special synergy that makes their music special. And you know what? Cake and cosplay just might be essential.

Outside of the musical quintet come two bonus characters, beloved of fans of the show. Hirasawa Ui is Yui’s younger, more responsible sister, and is my wife’s favourite figure of the set. She’s a great character who always has her sister’s back. In this world seemingly devoid of parents (Ui and Yui’s are apparently the kind that spend most of their time away on romantic sojourns, leaving the children to run the household) Ui cooks, cleans and keeps Yui fed. She is posed in house slippers, and is in the middle of tying her hair back. A friend who’d never seen the show suggested she was the most provocatively posed of the figures, but I maintain that it’s an innocent snapshot of a young girl getting ready for school.

No, that isn’t a head on the ground. It’s Yui again! This chibi figure of a famous scene in which Yui is lying on the floor calling for ice-cream from her sister (as it says on the base, “Uuuiii, Uuuiii… Aisu!”) comes as a bonus with the Ui figure. It’s a cute addition, but short of hanging out with my Nendoroid Petites, there isn’t really a good spot for her.

Finally, we come to the most customisable figure of the bunch, and the girl you have to go through if you want to get anything approved for your high school cultural club… it’s Manabe Nodoka! She comes with two interchangeable left arms, as well as armband, hat and book accessories. Her alternate arm looks as if she’s trying to stop her skirt from flipping up, and draws more attention to how short it is at the back, so I’ve opted to display her with a confident hand on her hips.

Alter’s attention to detail really is without rival within the anime figure scene. These girls hold a special place in my heart and were the first set I really hunted down. Despite other companies producing figures with different costumes, these really stand out as the best and most iconic. I’m really looking forward to Animaru! and Stronger’s release of the main five girls in honour of the show’s 5th anniversary, but until we get to see them in the wild, Alter’s will remain the best.