I didn’t actually get to play through most of 2013’s acclaimed games (Bioshock Infinite, The Last of Us, Gone Home), but I do own them (except for The Last of Us, since I don’t own a PS3) and I intend to play them all eventually. I did start on Bioshock Infinite and GTA V, but didn’t get very far until other things pulled me away. I did do a bit of travelling this year, both for vacations and for work, so most of the games I played were either fairly short, didn’t require a lot of resources to run on my old laptop, or were handheld/mobile titles. Of the games that I did play in 2013 (not necessarily released in 2013), the following were my favourites, in alphabetical order: 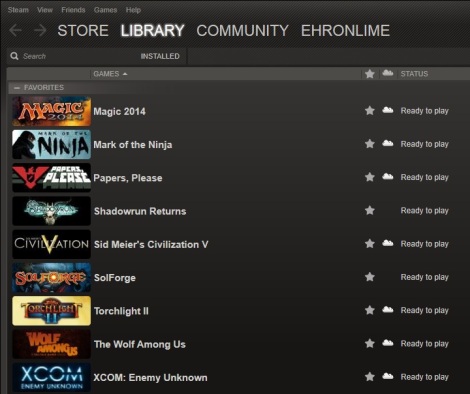 Candy Box, Candy Box 2 – A deceptively simple and addictive browser game, with an economy based on incrementally generated candy. I wrote about other browser games that make numbers go up.

Card Hunter – A splendid mix of tactical RPG and card game mechanics with cute art direction. The game is set up like a traditional tabletop RPG with paper cutouts for characters, snacks in the background, and a bumbling Dungeon Master complete with overbearing older brother. Playable in browser and comes with campaign and multiplayer modes.

Horse Master – One of the weirdest text adventure games I had the pleasure to play last year. You play as a drug-addled “Horse Master” hopeful with dreams of winning the illustrious title and leaving your paltry existence behind. A tale of hardship, desperation, emptiness and electroshock therapy ensues.

Magic 2014 – Duels of the Planeswalkers – I’ve been playing along with Duels of the Planeswalkers since its first instalment. It scratches my Magic itch when I can’t get a group to play IRL. This instalment introduced the opportunity to actually build your own decks out of a sealed pool, which is a feature that is worth the whole price of admission. As fun as Magic ever was.

Mark of the Ninja – Not a 2013 game, but possibly my favourite platformer. The stealth gameplay was challenging and rewarding, and I enjoyed being able to have different approaches to most of the scenarios in the game. While a completely non-lethal run was always possible, the assassinations were so satisfying that I rarely made it through a level without stringing one guy up on a post to send a message.

Nintendo Streetpass Plaza Games – PAX AUS 2013 introduced me to the wonders of the Streetpass Plaza games. Initially only a very basic dungeon crawler was available, but Nintendo released a bunch of new minigames this year that all integrated with Streetpass. When 3DSes with Streetpass turned on pass near each other, the little Mii avatars are exchanged and can be used in the various Streetpass games. Streetpass Squad in particular is a very entertaining take on the old school shmup. Very addictive, and it actually motivated me to bring my 3DS out and about with me.

Papers, Please – I really wanted to put this on the main list. However, I realised that I hadn’t played nearly enough to give it a good assessment. I’ve played it briefly twice, losing very quickly in my first game due to my own stupidity, and I stopped midway through my second run and haven’t returned to it in a while. It’s just so… bleak and stressful. However, I can’t stop thinking about it. Even the little I played made a big impression on me. Like Brothers, it’s another game that embraces and utilises the features of its medium so effectively that you can’t easily emulate the experience any other way (unless someone set up a booth and actors and made you “play the game” in real life).

Plants vs Zombies 2 – The other mobile game that took up a substantial amount of my time last year. PvZ2 expands on its original winning formula with more plants, more zombies and more puns. The IAP did not bother me at all as it wasn’t necessary to advance in the game, and I actually really enjoyed all the challenges.

Shadowrun Returns – Pretty oldschool tactical RPG. I really enjoy the setting and the mechanics are solid enough. The base campaign is pretty satisfying so far, and I’m curious to see what the user-generated campaigns are like.

Solforge – Another digital card game. Solforge uses the lane mechanic that I enjoyed in Spectromancer and Duel of Champions. It adds a cool “level-up” mechanic where the cards you play enable more powerful versions further in the game, and having the option of when to battle and play cards is a great addition. Looking forward to trying the draft mode.

Spaceteam – One of the most fun apps to pull out with a group off friends. It’s not so much a game app than a group shouting activity facilitator. It received a substantial update this year, which really increased its appeal (now Adroid and iOS cross-platform enabled!) Each player needs their own smartphone which shows them some buttons/knobs/levers and displays instructions that could be applicable to any player. It’s like a bridge simulator, only louder and sillier. I like the humorous button labels that lead to people shouting “Someone needs to Blame Society right now or we’re going to lose!”

Torchlight 2 – Diablo 3 kinda overshadowed Torchlight 2 for me in 2012, mainly because more people I knew played Diablo 3 and it was easier to get a multiplayer game going. I finally got more time in with Torchlight 2 last year and it’s been a real blast to play. The classes are fun to play, the art style is gorgeous, and I love having my pets take care of my commercial interests in town.

XCOM: Enemy Unknown – I only finished the bulk of the game in early 2013 so I’m counting it. Great progression, environments and tactical gameplay. It’s fun and atmospheric and even though they’re randomly generated, I’ve gotten quite attached to my squad of alien-killers. I’ve just started a second playthrough with Enemy Within, and I miss having Velasquez, Martine and Cheng around to clean up the alien scum.